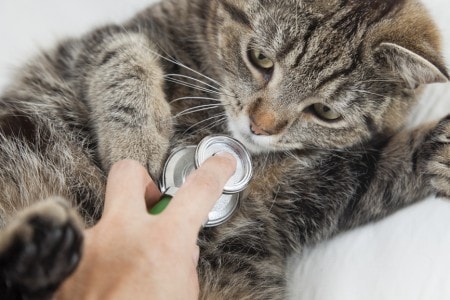 I’ve previously written about how music helps cats relax. A study at Colorado State University is looking at how classical music can help make a veterinary visit less stressful and thus lead to better veterinary care for cats. Music specifically engineered for cats can have a calming effect and even help with behavior problems. More recently, a study at the University of Lisbon in Portugal looked at another aspect of how music can help cats: they measured the respiratory rates and pupil dilation of cats who were undergoing spay surgeries.

Science Daily reports that the 12 female cats in the study were fitted with headphones, and were then exposed to 2 minutes of silence (as a control), followed randomly by 2 minutes each of Barber’s Adagio for Strings (Opus 11), Natalie Imbruglia’s Thorn and AC/DC’s Thunderstruck.

The results showed that the cats were in a more relaxed state while listening to the classical music. The pop music produced intermediate results, whereas AC/DC resulted in the highest readings of both parameters, which is an indicator of stress.

Dr. Carreira and his colleagues are also looking at how music may affect other physiological parameters such as cortisol release (cortisol is a stress hormone) and catecholoamines (a class of neurotransmitters such as dopamine), and expect to have results soon.

How will the study results help cats?

I find the implications of this study fascinating. There have been studies on the human side that relaxing music played in the operating room does not only benefit surgeons by increasing concentration and cognitive function, but that it also benefits patients, so it doesn’t seem like much of a leap to me that this would apply to both veterinary surgeons as well as feline patients.

“We do think that this gives rise to implications that the the use of non-pharmacological agents such as music can become very important in the medical and surgical scenario,” says Dr. Carreira. It may eventually allow veterinarians to decrease the anesthetic dose, which would reduce side effects and promote patient safety. “Improving the life quality and well being of our patients is the aim of any veterinary surgeon,” adds Carreira.

8 Comments on Music May Benefit Cats During Surgery