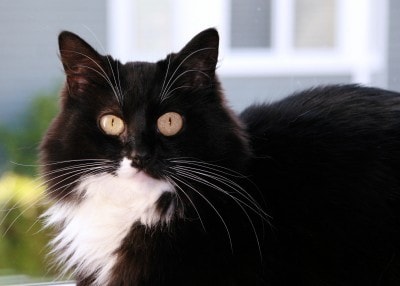 Two weeks ago, we introduced you to the benefits of CannaVet, a cannabis (hemp) supplement for pets developed by two Seattle veterinarians, Drs. Sarah Brandon and Greg Copas, who pioneered the use of medical marijuana for pets two years ago. I was so intrigued with the many benefits of this product, I asked Dr. Brandon to share one of her many success stories of using CannaVet as part of an integrative approach to treatment.

13-year-old Morgaine has been a patient of Dr. Brandon for more than 10 years.  In 2012, Morgaine started having appetite issues. Dr. Brandon ran diagnostics, including blood work, urinalyses, x-rays, and ultrasound. All results were normal. Morgaine’s guardian and Dr. Brandon chose to not pursue additional diagnostics at that time, and tried traditional appetite enhancement medications to get Morgaine eating again. They were having no effect. A series of other allopathic therapies, while doing nothing to harm Morgaine, also did not help to improve her appetite. In 2013, Morgaine began to take CannaVet, “and voila!” says Dr. Brandon, “She ate and ate well!” 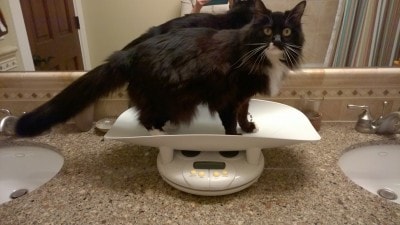 However, despite her excellent appetite, Morgaine was losing weight. In early 2014, Dr. Brandon performed an exploratory laparotomy. Morgaine had small cell lymphoma in her intestines, but everything else looked good.

Morgaine received chemotherapy (low dose chlorambucil), as well as prednisolone and an appetite stimulant. She also gets a few other supplements including probiotics and lysine (she’s prone to kitty colds.) She is tolerating her chemotherapy amazingly well.

Despite all of these medications and supplements, she still seemed to need a nudge.  Dr. Brandon increased her hemp dose, giving it twice daily. Within a few months, Morgaine was was back on her feet. “Since she didn’t respond well to typical pain control, the cannabis really helped her post-operative pain needs,” said Brandon. “Now she’s symptom-free and has reached 9 lbs 11 oz, holding steady.” Morgaine even pushes her younger brother out of his dish! The next step will be to reduce dosages of her allopathic medications. 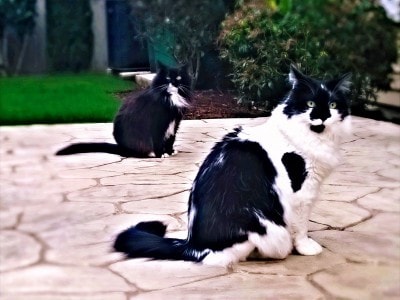 “We’re trying to wean her off of her appetite stimulant as her most recent exam shows she’s doing quite well in the weight department,” says Dr. Brandon. “We’re also weaning her off of prednisolone.” Morgaine is officially in remission, so she may be weaned off famotidine (a medication that helps prevent gastric ulcers) as well. “Nadya and I want her on the lowest effective combination of medications/supplements, but we know it will take time,” adds Brandon. “We don’t want to undo all the great progress, so we’ll take it slow.” 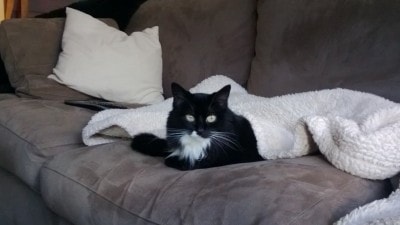 Morgaine’s guardian is thrilled at how well Morgaine is doing on Cannavet. “I’m so impressed with how she’s returned to being her sweet cuddly self, purring, and eating much better now, vs. hiding under the bed, nauseous, and depressed. ” says Nadya Swafford. “She’s back to her lovingly affectionate self and is also quite active watching the birds and rabbits from her window perch. Her coat is much improved and her eyes are brighter.” Since switching to the higher dose, her appetite improved further and she’s now at a healthier weight and loves to be brushed. “She never liked being groomed before, being so thin,” says Swafford. 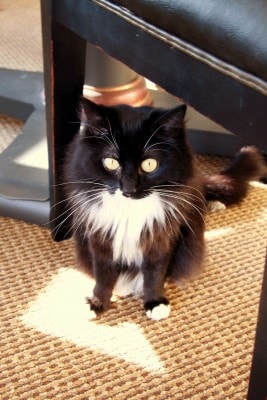 I asked Nadya how her friends and family reacted to Morgaine taking medical marijuana. “They’ve been extremely positive and supportive about Morgaine’s treatment with CannaVet,” says Swafford. Responses have ranged from “that’s so cool!… If it works for people, then why not for animals” to “that’s wonderful!” and “I want to check into it to see if my cat or dog would benefit as well.” Everyone understands that this is an adjunctive and palliative supplement, not something to get Morgaine “high”.

“Morgaine and I have shared 13 years together and she means so much to me,” says Swafford. “I would not just give any supplement that makes claims suggesting it’s beneficial for my kitty’s health. The tremendous amount of research that CannaVet has done, the fact that it’s organic and non-GMO, and seeing the positive results of its application with other companion animals gave me complete confidence in trying CannaVet with Morgaine.” Swafford knows that CannaVet is not a cure-all, but “I’m so glad this option is available and Dr. Brandon recommended prescribing it, as it has certainly improved Morgaine’s quality of life and I’m so grateful for that.”

21 Comments on How Medical Marijuana Helped a Cat with Lymphoma