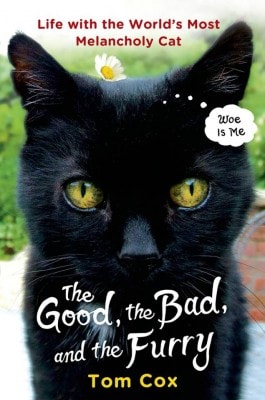 I must be in the minority, because I haven’t yet read Tom Cox’s first two books, Under the Paw: Confessions of a Cat Man and Talk to the Tail: Adventures in Cat Ownership and Beyond, but after reading the just released The Good, The Bad, and the Furry: Life With the World’s Most Melancholy Cat, I’m going to have to rectifiy this.

This humorous and heartwarming memoir about a man and his cats offers a thoroughly enjoyable look into the life of a cat guy. Cox shares his home with a group of very diverse felines who keep him on his toes as he adjust to life as a newly single man.

There’s The Bear, a cat who carries the weight of the world on his furry shoulders. The intellectual of the group, The Bear would prefer a life of quiet solitude with plenty of time contemplate the ways of the world. Much to his chagrin, he is surrounded by cats (and, in his opinion, humans) of a significantly lower IQ.

There is Janet, who is actually a male. There is Ralph, a tabby who enjoys meowing his own name at top volume, and there is Shipley, Ralph’s brother, who likes to steal food.

Funny and poignant, this book will make you smile and tug at your heart strings, often at the same time. And you will probably recognize some of the cats who share or have shared your life in the antics of Cox’s cats.

Tom Cox has a monthly column in the Guardian’s Life and Style section. He also has regular slots in Golf International magazine, Your Cat magazine, and reviews books for several newspapers. He lives in Norfolk, England. You can learn more about Tom Cox and his book on his website, http://www.Tom-Cox.com.

I received a copy of this book from the publisher. Receiving the complimentary copy did not influence my review.

10 Comments on Review: The Good, The Bad, and the Furry by Tom Cox