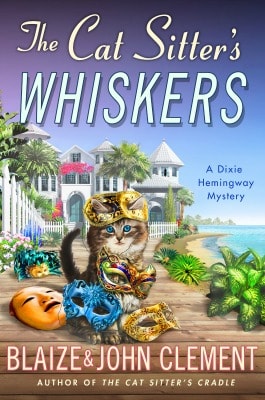 , featuring Dixie Hemingway, a pet sitter who lives on one of the Florida keys, has been a favorite of mine ever since the first book in the series came out seven years ago. The series was originally written by Blaize Clement. Her son, John Clement, continued the series after her death in 2011. Blaize had been collaborating on plots and characters for future novels with John.

In The Cat Sitter’s Whiskers, Dixie’s heads off early one morning to see her first cat client of the day. She doesn’t expect her visit with Barney Feldman, a beautiful eight-year-old Maine Coon, to be anything but routine: play Barney’s favorite game of hide and seek, feed him his breakfast, and groom him. But it turns out Barney, whose humans are on vacation, is not the only one in the home filled with a valuable collection of somewhat creepy masks. Dixie is knocked out cold by an intruder wearing one of the masks.

When Dixie regains consciousness, she calls the police. Unfortunately, when they arrive, there are no signs of anyone breaking into the house, nor are any valuables missing. Did Dixie imagine the whole thing? The bump on her head the size of an egg says differently. As Dixie tries to figure out what happened, she gets drawn into a world of black market antiques, dark secrets and murderous revenge.

I love everything about this series: the tropical setting, the thoroughly likeable heroine, and the masterfully woven plot lines. A great read for anytime of year, but especially enjoyable during these cold early spring days that make you wonder whether it will ever get warm again!

For up to six ways to enter, see the Rafflecopter widget below. This giveaway is open to readers in the United States and Canada only, and ends Friday, April 3. Winners will be chosen by random drawing*.

a Rafflecopter giveaway
*No purchase necessary. Void where prohibited. Winners will be notified via e-mail. Prize winner must provide The Conscious Cat with a physical address to which the prize will be mailed within 72 hours. If this information is not received, an alternate winner will be chosen by random drawing. Winners will be announced in a separate post following the drawing.

96 Comments on Review and Giveaway: The Cat Sitter’s Whiskers