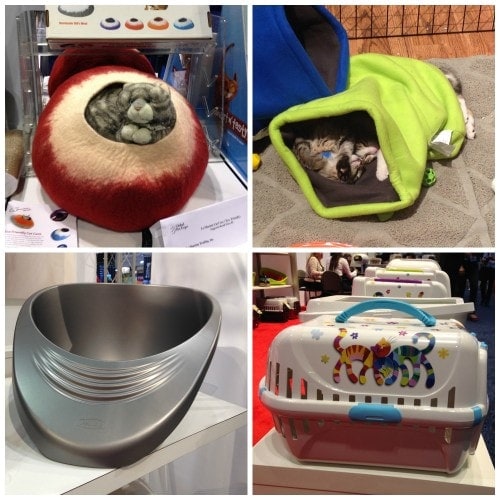 I had the pleasure of spending Wednesday through Friday at Global Pet Expo in Orlando. This is the largest trade show of pet products anywhere in the world. I haven’t seen final attendee numbers yet, but there were more than 10,000 exhibitors in more than 3,000 booth in the Orange County Convention Center. In the coming days and weeks, I’ll be bringing you a lot more information about some of the fantastic new products I saw there. Today, I’d like to share just a few of my personal highlights with you.

My first stop Wednesday morning was in the New Product Showcase. The pictures shown above are only a very small selection of some the cool new things I saw there. The felted cat cave bed was one of my favorites. The green snuggle sack/tunnel from the Jackson Galaxy Collection by Petmate got a purrfect endorsement from two kittens from Pet Alliance of Greater Orlando: these two little guys slept through all the activity at the booth! The futuristic looking litter box is part of a new line by Petmate. I like the sleek and well thought out design. The high sides will keep litter in, and the sloped and ridged entry will make it easy even for senior cats to get into the box. The colorful carriers from Moderna Products, a company based in Belgium, caught my eye because they looked so different from the usual carriers. 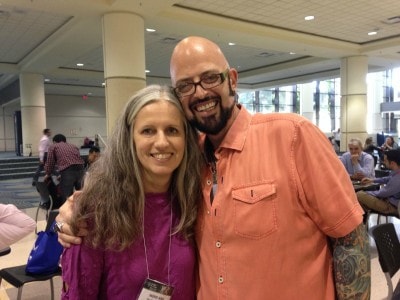 The best part of attending any pet related gathering is running into old friends and making new. One of my personal highlights was spending some time with Jackson Galaxy, who made an appearance at the Petmate booth. 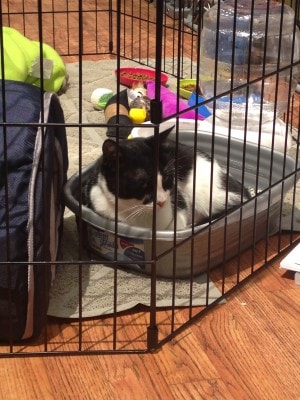 Jackson’s appearance was in partnership with Pet Alliance of Greater Orlando. In addition to the two kittens shown above, who were not bothered at all by all the activity around them, they also brought a beautiful black and white kitty named Ting who was pretty relaxed as well – until a dog stopped by the booth. It turned out that this poor little girl was absolutely terrified of dogs. I got in the enclosure with her and gave her some Reiki, which helped to settle her down. She even got confident enough after her Reiki session to walk to the front of the enclosure for a little while. 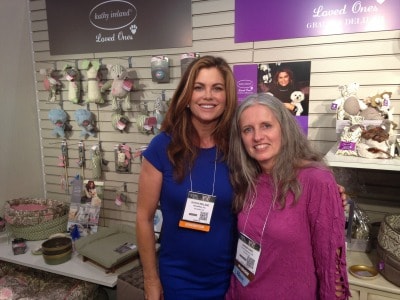 Kathy Ireland was at the expo for a special reception at the Worldwise booth. Her Loved Ones pet product collection is one of the prettiest and most well-designed lines on the market. Kathy also spoke at the Professional Womens’ Network breakfast. It was such an inspiration to listen to her share her journey from super model to business mogul. It was particularly refreshing to realize that, despite her celebrity status, she faces some of the same challenges that all women in business face each and every day.

My Choice for Best in Show

Walking around the massive show floor always makes me feel like a kid in the proverbial candy store. It’s hard to pick a favorite among all the wonderful and innovative products, but this year, the choice was easy for me. My absolute favorite product of the entire show was the new Vesper line of cat furniture from Hagen. I had been drooling over this line since I first saw it at Superzoo in Las Vegas last July. Allegra, Ruby and I are excited that we’ll get to review this line in the near future, so stay tuned!