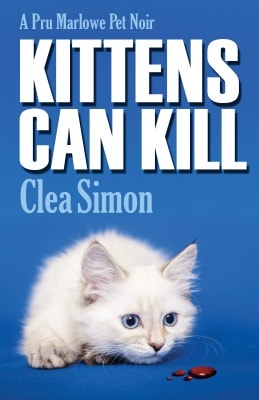 Ernesto, the white kitten at the center of Kittens Can Kill, Clea Simon’s latest mystery in the Pet Noir series featuring animal psychic Pru Marlowe, may not know exactly what happened when a noted Beauville lawyer died, but he is pretty sure that Pru will figure it out. In the meantime, we sat down with him to ask him what was going on – and how he feels about his new role as the only witness to murder.

Granted, I wasn’t sure what that meant until that pretty lady picked me out. She was nice, too, though her coat was sleek and dark as opposed to my fluffy whiteness. She said I was adorable and that I “would do.” I wasn’t sure what that meant, either, but when she brought me over to that old man, he sure seemed surprised, so I guess that explains it.

Now this other lady is here. The one they call “Pru,” and a bunch of other people, too. Everyone is talking and it’s too loud and a little scary. That Pru lady seems to be on my side, at least. She even smells like a cat, a little, so maybe she lives with one. And she keeps saying I’m adorable, too. But everyone else is talking like “adorable” is what made that nice man cough and fall down. That “adorable” is what made him lie so still. That can’t be right, can it?

Coming this Friday: Review of Kittens Can Kill
and a chance to win an autographed copy!

The dead don’t keep pets. So when animal behaviorist expert Pru Marlowe gets a call about a kitten, she doesn’t expect to find the cuddly creature playing beside the cooling body of prominent Beauville lawyer David Canaday. Heart attack? Drug interaction? Or something more sinister? Will Pru find out who or what killed David Canaday?

5 Comments on Kittens Can Kill: When a Cat Is the Only Witness