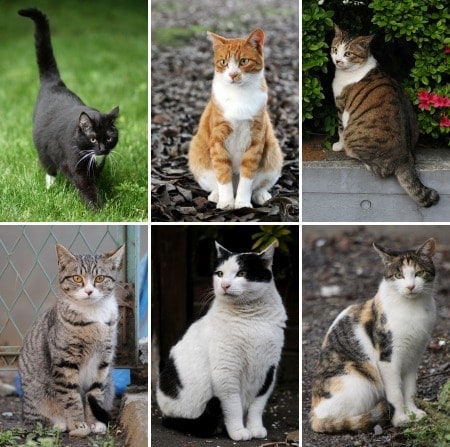 Most cat guardians will adopt a cat based on her personality, but some also have a distinct preference for a particular coat color or pattern. But is there a link between coat color and personality? After all, both are controlled by genetics, so it wouldn’t be much of a leap to believe that there is a connection.

In a recent study, researchers from California State University and the New College of Florida surveyed nearly 200 people. Study participants were asked to associate 10 personality terms (active, aloof, bold, calm, friendly, intolerant, shy, stubborn, tolerant and trainable) with five cat colors–orange, tri-colored (tortoiseshells and calico cats), white, black and bi-colored (white and anything else). While story respondents said they placed more emphasis on personality than coat color, there appears to be some evidence that the two are linked, at least in the cat guardian’s perception.

It appears that there are some commonalities between coat color and a cat’s personality, but it is important to keep in mind that these are generalizations, and each cat is a unique individual. Color may be only one aspect of what shapes a cat’s personality. Other factors, such as breed and environment also come into play.

Tabbies have a reputation for being laid back, calm and more sociable.They’re also said to be very affectionate, and relaxed to the point of being lazy.

Black cats can be stubborn and friendly at the same time. They are said to be good hunters, but they can have a tendency to roam. They’re good natured and sociable.

Orange cats are usually males (only one out of five orange cats is female). Cats with this coloring can be laid back and affectionate, but can also have a bit of a temper. Females tend to be more laid back than males.

Black and white cats (some are known as tuxedo cats when their coat pattern resembles a tuxedo jacket) are said to be even tempered and placid, but they can also be wanderers. They can be very loyal to their family, often to one person in particular, and can be real lap cats.

Tri-color cats such as tortoiseshell and calico cats have a reputation for unique personalities, often referred to as “tortitude.” These cats can have a bit of a temper, and they tend to be very possessive of their guardians.

Cats that have lighter coat colors all carry the same gene, called the dilution gene. There is conflicting information on this particular coloring. Some sources say cats with these colors can be mischievous and a bit frantic, while others say they are laid back and mellow.

8 Comments on Is There a Link Between Coat Color and Personality?