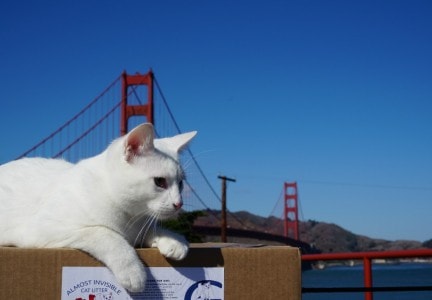 StovePipeCat is one lucky kitten. With less than an hour left to live at a Los Angeles, CA “shelter,” the little kitten was rescued by a volunteer who fostered him and his two biological sisters, and who rescued three other cats while she was at it. Two weeks later, StovePipeCat was adopted to a married couple with grown children and a step-sister cat. Little did StovePipeCat know how much his life would change.

A week after he was adopted, he left on a 20-day, 4,000+ mile road trip from L.A. to Dallas to Portland, Oregon to Las Vegas and back. His new humans took him everywhere they went: the bank, the post office, stores, and even business meetings. Originally named after an incident that took place a few minutes after he was allowed to explore his new home, and that involved six panicking humans searching for him for over five hours to finally find him in the housing inside the stove, his nickname became StovePipe the Traveling Cat. 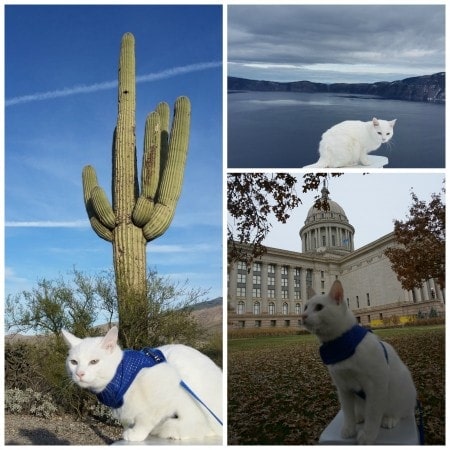 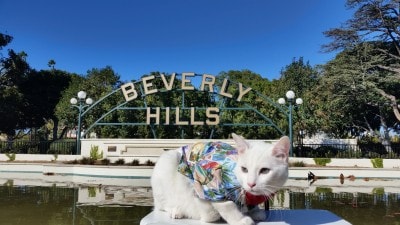 All of StovePipeCat’s travel and living expenses are paid by the Almost Invisible Cat Litter Company, which has renamed their superior-performing cat litter product “Stove PipeCat’s Awesome Almost Invisble Cat Litter.” But his adopters decided that they didn’t just want him limited to being a spokes cat for an innovative product. They also want everybody to know how cool rescued cats can be, and to put an end to the systematic killing of household pets in the USA and the rest of the world. More importantly, StovePipeCat and his humans want to thank rescue volunteers and show them how much their efforts are appreciated. 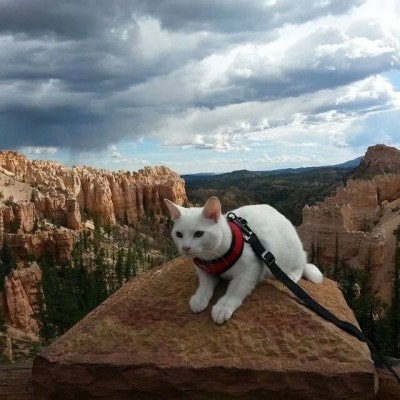 Tabby’s Place Sanctuary in Ringoes, New Jersey was the first adopter of this program, Classy Cats in Roanoke, Texas was the second. To nominate your animal charity, contact StovePipeTheTravelingCat@GMail.com. Charities must have 50 or more active volunteers and a valid 501(c)(3) tax exempt status.

For more information about StovePipeCat, please visit his website. You can also find StovePipe the Traveling Cat on Facebook.