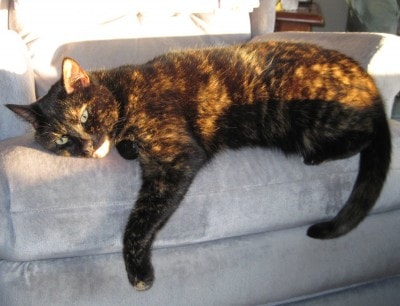 One of the many things I admire about cats is their ability to focus. If you’ve ever watched a cat stalk her prey, you know that even though the cat is very much aware of what is going on around her, she will not break her concentration on waiting for just the right moment to pounce. What seems to be so easy for cats can be an overwhelming challenge for humans.

We are  constantly exposed to a never ending stream of information and stimuli. Studies have shown that the brain cannot effectively switch between tasks, and it can actually take longer to get things done if you constantly give in to distractions. More importantly, allowing yourself to be constantly distracted is the antithesis of conscious living. I believe that going through life mindfully is good for the soul, and changing your response to the inevitable distractions life throws at you is important.

Aside from the obvious – unplug more, turn off email and text notifications on your smartphone and stop checking email obsessively for new messages (some statistics show that the average person checks their mobile phone 150 times a day – how is this even possible!) – the following three tips may help minimize distractions.

Physical clutter distracts on a lot of different levels. Physical clutter is a visual distraction, drawing your attention to thoughts about how you really should clean your desk, or how you really should get rid of some of the chotchkes on your shelves, rather than to the task at hand. Cluttered environments drain your energy, whether it’s your desk, your car or your home. This applies to digital clutter as well. Close unused programs, clean up desk top icons. Pay attention to what distracts you, and remove the trigger.

Rather than starting your day by jumping right on the computer or turning on the television, start the day by meditating, savoring that first cup of coffee or tea of the day, or journaling (after you feed the cats, of course!). Don’t end your day checking email “just one more time” or allow yourself to fall asleep while watching television.  Studies have shown that the light emitting from TV screens and devices actually disrupts sleep cycles, preventing you from getting a good night’s sleep. Your brain needs to rest. Evening is also a great time to keep a gratitude journal.

3. Keep a to do list, and update it frequently

Writing things down anchors them, and frees up mental space. But don’t let your to do list become yet another distraction. Find a system that works for you, and stick with it. Take a few minutes at the beginning of each day to prioritize your to do list, and to eliminate tasks that may no longer be important.

Perhaps cats have it a little easier when it comes to focusing on one thing at a time – after all, I have yet to see a cat with a smartphone. But even though it may be more challenging for humans, I believe that these three tips are a good first step toward living more mindfully and with fewer distractions.