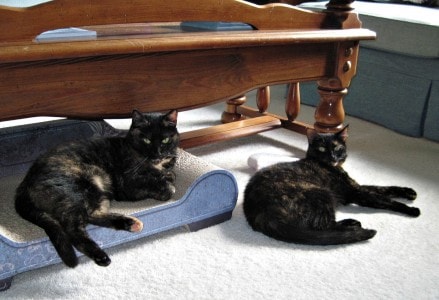 Cats are creatures of habits who thrive on routine. Most cats will have a set pattern they follow every day. Cats are territorial animals, so their routines will develop around your schedule and your household routines. While such a routine driven life may seem boring to humans, it helps cats feel safe and confident. In fact, routines are so important to cats that having them disrupted can even impact their physical health.

A study conducted at the Ohio State University, funded by the National Institutes of Health, looked at how stress affects cats. Of the 32 cats in the study, twelve of the cats were healthy, and twenty had FIC (feline interstitial cystitis), an often painful, inflammatory condition of the bladder and urinary tract. Researchers  found that when they changed the cats’ environment or their daily routines, even the healthy cats got sick 1.9 times a week and the others twice a week. Levels returned to normal when the stress had passed.

The best way to keep your cats happy and healthy is to keep their routine, and yours, as consistent as possible. If you have to make changes, try to introduce them gradually. Something that may not seem like a big change to you, such as a vacation or a house guest, may be a very big deal to your cat.

Allegra and Ruby have their own set routines. They’re pretty good about letting me get up when I’m good and ready, but since I’m usually up by 5:30, that probably helps avoid impatient wake up tactics. After I feed them, I usually spend an hour working, and they take a little after breakfast nap. As soon as I get up from my desk chair, they know it’s playtime, and they both run to the hall closet where our interactive toys are kept. We play for 10-15 minutes, then it’s time for my breakfast, which seems to be their signal that it’s time for some birdwatching. They both have preferred spots: Ruby likes to sit by a downstairs window at ground level, Allegra watches from the top of our cat tree by the sliding glass doors.

They seem to know when it’s lunch time, because they start to wake up from their naps a few minutes before I start to stretch and get up (they taught me well!). They know that they get brushed, which is followed by treats, before I prepare my lunch. Then it’s time for an another extended nap. Interestingly, the spots where they nap in the afternoon are driven by weather. On sunny days, they’ll be in my bedroom; Allegra will be on the window napper, Ruby on the bed. On cloudy days, Allegra will nap on the window perch, but Ruby will claim the cable box.

By mid-afternoon, they start to get restless. Since I get up so early, dinner is also on the early side, and if I don’t get out of my chair when they think it’s time, they start pacing behind me. Dinner is preceded by another 10-15 minute round of play, and is followed by another long nap.

I think one of the reasons I love cats so much is their love of routine. Even though I like to mix things up, I, too, thrive on routine and can be reluctant to change.

37 Comments on Why Cats Thrive on Routine