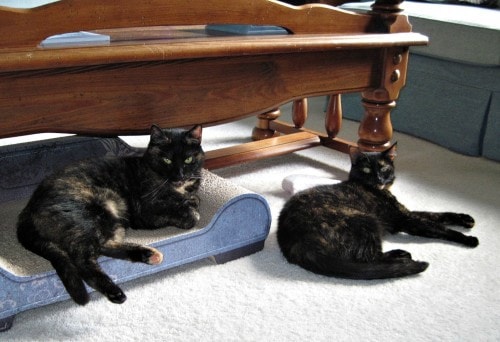 Two of our most popular posts featured, not surprisingly, torties!

In June, Conscious Cat reader Elizabeth Moore shared her story of how her tortie Lucy saved her life. “One morning, Lucy leaned across me and pushed my left breast with her head,” wrote Elizabeth. “I moved her away as I was about to get up and attend to her breakfast. She repeated the behavior the next morning but this time she was much more insistent – annoying even. I reached across to stop her and as I moved her head I felt a lump. A lump that was not going away. A lump I should have found myself had I not been so haphazard in my own self breast examinations.”

In May, Concious Cat reader Glen Bowley relayed the story of how his tortie Gigi alerted his wife to a stainless steel kettle that had been forgotten on the electric stove and had boiled dry. Gigi’s unusual behavior alerted his wife. When she followed Gigi into the kitchen, the burner was on the verge of turning red.

In September, we had the opportunity to interview James Bowen. I have been in love with Bob ever since I read the British edition of A Street Cat Named Bob more than three years ago, and have followed the amazing journey of the pair since then. As far as life-changing cats go, Bob is in a league of his own. James and Bob’s newest book, A Gift from Bob, How a Street Cat Helped One Man Learn the Meaning of Christmas, was published in October.

In July, I had the pleasure of speaking with Joy Warner, a soldier in the National Guard. Our military personnel make so many sacrifices when they deploy, and I’ve always felt that one of the biggest has to be leaving their beloved pets. Thankfully, there are organizations who assist members of the military in finding temporary foster care for their pets during deployments. PACT for Animals helped Joy find a temporary foster placement for her two Persian rescue cats Herbie and Petunia while she deployed to Afghanistan for nine months.

Samantha Martin and the Amazing Acro-Cats

In July, I had a chance to meet Samantha Martin and the Amazing Acro-Cats. I had seen videos of their performances for several years, and I was delighted that I finally got to see the hour long show, featuring over a dozen beautiful rescue cats who perform tricks ranging from walking on tightropes and balls to jumping through hoops to bowling and ringing bells. From the moment I met Samantha, I knew that I had encountered a kindred spirit. Everything about Samantha Martin exudes her love for cats: for her own cats, for the cats she rescues, and for the cats she’s never even met, whose lives she wants to make better by educating people about the important role training can play in the life of both cat and human.