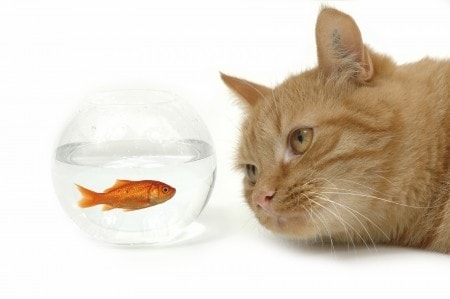 A lot of cats love fish, but feeding it as more than a very occasional treat could is not a good idea and could be harmful to your cat’s health. The primary fish used in cat food are salmon, tilefish (usually identifed as ocean whitefish on the label) and tuna. Each of them presents health issues, because fish can contain toxic doses of common water pollutants, heavy metals, and other contaminants. Mercury is considered one of the top ten chemicals of major public health concern by the World Health Organization.

Mercury ends up in the air from power plant emissions. When it rains, the mercury in the air falls into lakes, rivers and oceans. Bacteria in these bodies of water convert the mercury into methylmercury, a highly toxic form that gets easily absorbed into small organisms. Small fish ingest it when they eat those tiny organisms, and bigger fish eat the smaller fish. Because of this, larger fish, who are at the top of the predatory food chain, contain higher levels of mercury.

Chronic exposure to mercury causes major problems in cats and humans. Signs of mercury poisoning in cats include neurological damage which manifests as a loss of coordination and balance, or difficulty walking. Since these symptoms can mimic other illnesses, including thiamine (a B vitamin) deficiency, mercury toxicity may not be the first thing a veterinarian suspects, so it may remain undiagnosed.

Mercury has been linked to kidney damage in human medicine, ranging from increased protein in the urine to kidney failure. Kidney disease in cats has reached epidemic proportions, and while there is no definitive link to the high fish content in many cat foods, it’s not much of a leap to consider that there may be a correlation.

Keep your cat safe from mercury

If you must feed fish-based foods, examine cat food labels carefully. Many commercial foods have small amounts of fish even in varieties labeled as poultry, beef or other proteins. Unfortunately, health regulations for meat and fish used in pet food are far more lax than they are for human foods. The Natural Resources Defense Council maintains a Consumer Guide to Mercury in Fish that lists fish from least to highest mercury content. Use the list as a guide when you check cat food labels.

44 Comments on Mercury in Fish-Based Cat Food: What You Should Know