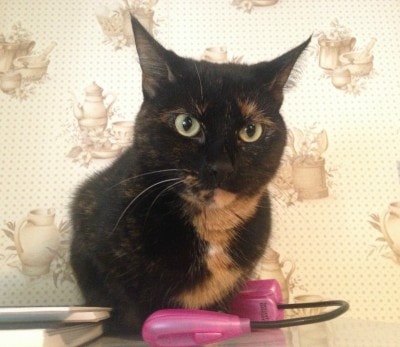 Hi everyone, it’s Allegra! I have a confession to make: even though I’m usually the good sister, I did a bad thing the other day: I broke something even after Mom told me to leave it alone.

I recently discovered that sitting on top of the microwave is a lot of fun. I can see what’s going on in the kitchen, the dining room, and even the hallway. It’s prime feline real estate, that’s for sure! Is it my fault that Mom also uses the top of the microwave to store some stuff, like papers, and a Might Bright reading light? The reading light is a really cool pink color, and it just looked like it might make a fun toy. So, I did what any self-respecting cat would do: I started batting at it.

And it moved! Awesome! Unfortunately, it made some noise when it started moving, and when Mom came to see what I was doing, she told me in no uncertain terms to stop it. Sheesh! I was just having fun. When I batted at it again, she lifted me off the microwave and put me on the floor. Spoilsport!

I sort of forgot all about it, but then, later that morning, Mom was on the phone in the living room. And I saw my opportunity. I very quietly jumped up on the microwave, and started batting at the light again. After a few minutes it fell. And it made a very satisfying “thunk” when it landed on the kitchen floor.

What was not quite so satisfying was that it also sent Mom running into the kitchen. To her credit, she didn’t yell at me. She just looked at me, sighed, and said “well, now you’ve done it, Allegra.” Done what?

Well, apparently, I broke the thing. I thought it looked pretty intriguing, because now, instead of just one toy, there were multiple toys on the kitchen floor! A snake like thing, a couple of pieces of busted plastic, and even some wires hanging out of the thing. But Mom, being the wet blanket that she can sometimes be, just scooped everything up and threw it in the trash. Bummer!

She said that now she would have to order a new one from someplace called Amazon. And that I was lucky I was a cat, because otherwise, she’d make me pay for it out of my allowance. Hmm? What is this “allowance,” and why don’t I have one? And besides, it’s her fault that I broke it. She shouldn’t have left it up there, where it was just begging me to come play with it.

Have your kitties ever broken something that belonged to you?