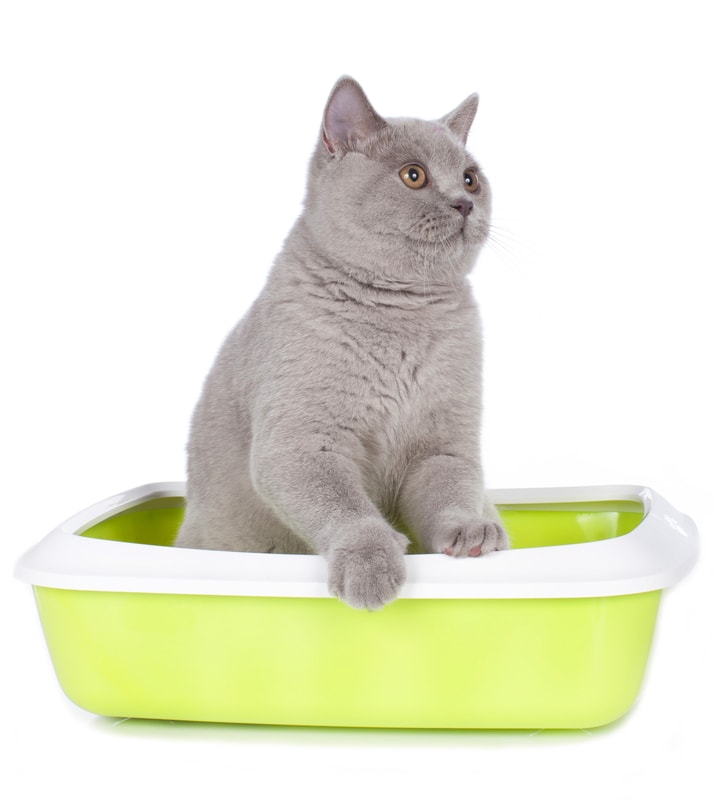 The average cat uses the litter box three to five times a day. It would make sense that something that is used so frequently on a daily basis requires that we humans put a lot of thought into it. Unfortunately, cat guardians often select a litter box for all the wrong reasons – or at least for the wrong reasons from the cat’s perspective.

I was delighted to see that the American Association of Feline Practitioners (AAFP) devoted an entire section of its new Feline House-Soiling Guidelines to designing the optimal litter box. Their recommendations closely mirror what I’ve been telling my readers and clients for many years. When it comes to finding the perfect litter box for your cat, keep the following in mind:

The rule of thumb has always been that the number of litter boxes in a home should equal the number of cats, plus one. To some extent, it will depend on the personalities of the cats within a household whether you really need that many boxes. Some cats don’t mind sharing, while others won’t even urinate and defecate in the same box. Use the rule as a guideline and adjust according to your individual needs. Some households may be able to get away with fewer boxes, others may need even more.

Don’t put the litter box in out of the way places. If the box is hard to get to, your cat may not use it. Have at least one box on each level of a multi-level home. This becomes especially important if you have senior cats who may have trouble getting up and down stairs quickly enough to reach a box. Avoid placing litter boxes near feeding and watering stations. Cats don’t like to eliminate where they eat. Don’t place litter boxes near noisy appliances such as washers, dryer, or furnaces.

Don’t locate litter boxes right next to each other. Cats tend to view that as one large box, and if they don’t like to share a litter box, you loose the advantage you’re trying to gain by having multiple boxes in the first place.

The size of the litter box is almost as important as the location. In this case, bigger is always better. You want the cat to be able to comfortable turn around in the box. A good rule of thumb is that the box should be at least 1.5 times the length of the cat from nose to the base of the tail. For some really large cats, even the largest commercial litter boxes may not be big enough. Alternative boxes such as sweater storage or under the bed storage containers can make great litter boxes.

I am not a fan of hooded or covered litter boxes, and most cats don’t like them, either. They’re often too small for the cat to comfortably turn around in and do their business, and they trap odors inside, making them very unpleasant for the cat to use. Dust can also be much more of a problem in a covered box, as it becomes more concentrated when cats dig. If you must use a covered box, at the very least, remove the filters provided by some manufacturers. They’re designed to trap dust and odors, making it nice for you, but not so nice for kitty inside the box!

I also don’t recommend automatic or “self-cleaning” litter boxes. They’re designed for the human, not for the cats who need to use them.

The choices for different cat litters are becoming overwhelming. How is a cat guardian to know which one is the best choice? Most cats prefer a soft, sand-like, unscented clumping substrate. I believe that the most important choice you can make about the litter you use has to do with scent more than with what the litter is made of. Cats have a much stronger sense of smell than humans, and while a scented product may smell nice and fresh to us, it can be overpowering to sensitive cat noses, and it can cause cats to avoid the litter box.

Despite the availability of many alternative litters, the best cat litter that I’ve found, and have used for many years, is Dr. Elsey’s Precious Cat. This clay litter clumps harder than any other litter I’ve tried, it has virtually no dust, and, most importantly, cats like it. If you want to experiment with different types of litters, always make sure you keep the original litter that your cats are currently using in at least one box. A word of caution: if you don’t have litter box problems, don’t tempt fate by offering different litters. You may inadvertently create a problem by confusing your cats.

Avoid using liners or grids – most cats don’t like them. Be careful about using litter mats. These mats are designed to trap litter so it doesn’t track, but the rough surface of some of these mats are hard on soft kitty paws and can lead to litter box avoidance for some cats.

Remove waste at least once a day, preferably several times a day, and add litter as needed. At least once a month, dump out the entire litter box and thoroughly clean it with hot water and unscented soap. Don’t use harsh chemicals or ammonia based cleaners. Replace litter boxes completely after 6 months to a year. No matter how well you clean, the porous plastic will start to break down and eventually absorb bacteria.

If you must use litter additives to control odor, use enzyme or probiotic based products with no added scent. Baking soda is an inexpensive litter additive that provides good odor control. 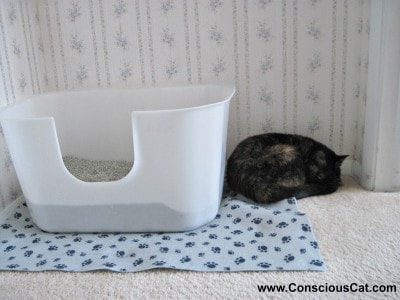 We think the NVR Miss litter box is the ultimate litter box, and we have used it for several years. This high-sided box prevents litter from being scattered all over the place, and it’s perfect for vertical pee-ers. It’s also nicer to look at than a homemade high-sided litter box.

I’m not sure why Ruby likes to sleep next to it, it probably has more to do with the fact that it’s right outside my office than that she actually likes sleeping next to the litter box!

43 Comments on The Optimal Litter Box for Your Cat