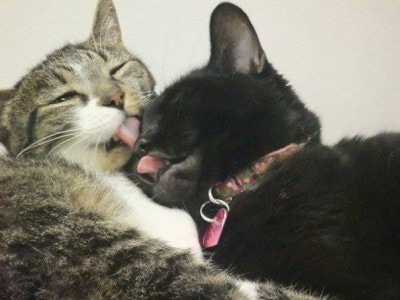 It’s one of the sweetest behaviors guardians of multiple cats can witness: two adult cats grooming each other. Have you ever wondered why some cats do that, and others don’t?

The scientific term for this behavior is allogrooming or social grooming. A 1998 study conducted by researchers at the University of Southampton, UK and the University of Leiden, Netherlands, analyzed grooming interactions among a group of 83 domestic cats. The study shed some interesting light on this behavior.

Allogrooming is focused on head and neck area

The study found that most of the mutual grooming was directed at the head and neck area. This may also explain why cats love to be petted and scratched in that location, to the point of often even rotating and pushing their heads into human hands and purring, similar to what they would do during an mutual grooming session.

Why do cats groom each other?

Allogrooming tends to happen most frequently among cats who are related, or cats who get along very well. Mutual grooming may be a resurgence of a cat’s mothering instinct, although it is also seen in male cats.

The hierarchy of allogrooming

But allogrooming is not all peaceful. Researchers found antagonistic behavior in 35% of interactions. Groomers showed aggressive behavior more often than groomees. Interestingly,  groomers often groomed themselves after grooming a partner. Since grooming is also calming for cats, that may be a self-regulating behavior. These results are consistent with the hypothesis that allogrooming in domestic cats may be a way of redirecting aggression.

Do your cats groom each other?

Photo ©JaneA Kelley, used with permission. JaneA and her cats write the blog Paws and Effect.

151 Comments on Why Do Cats Groom Each Other?