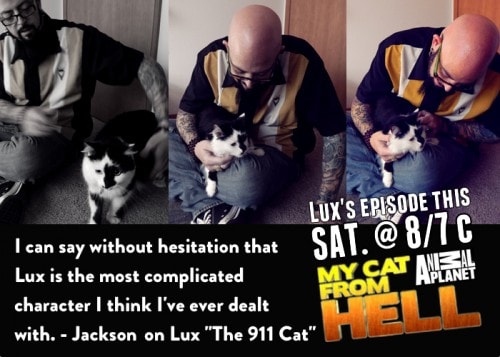 This Saturday on My Cat From Hell, Jackson Galaxy will take on what he calls the most challenging case in the 15 years he has worked with cats: Lux, the Portland cat whose guardians barricaded themselves, their baby and their dog in the bedroom of their apartment and called 911 to request assistance when Lux became severely aggressive.

When the story broke last March, it unleashed a firestorm of reaction among cat lovers, with many, as is so common with these types of stories, jumping to judgment about the situation and Lux’s guardians without knowing all the facts. But there is more to this story than what the 911 tapes revealed.

Yesterday I had a chance to speak with Jackson about the episode, which will air on Animal Planet tomorrow, Saturday, June 14, at 8pm Eastern/Pacific (check local listings.)

When the story hit the media, Jackson was contacted by numerous outlets. He told everyone to back off “because nobody knew the whole story at the time.” He felt that the way the incident was sensationalized was not helping anyone, least of all Lux. At that time, the current season of My Cat From Hell had just wrapped up shooting, and Jackson was exhausted. “I absolutely dreaded the thought of going back in. Next thing I know, I get a call that the family wants to work with me.”

“This episode is unlike anything we’ve done in 105 cases over 5 seasons,” says Jackson. “It feels like a new chapter for the show.” The entire hour of Saturday’s episode is dedicated to Lux’s case. “This show was put together faster than anything we’ve done before,” adds Jackson. “I’m nervous, but excited. I want the audience to take this ride right along with me.” Jackson says the effort put into this episode by Animal Planet, local networks, the production company, and two Portland veterinarians, was unrivaled. 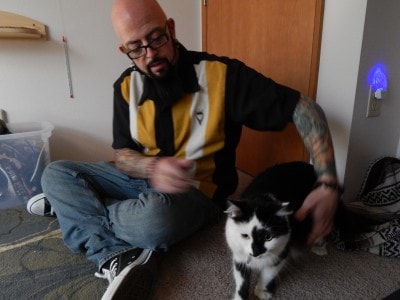 I asked whether what happened with Lux was a classic case of redirected aggression – because that’s certainly what it sounded like to me from what I’d heard about the story. “It wasn’t a classic case of anything,” says Jackson, who made the same assumption after watching the tapes. “I had my lunch handed to me with this situation.” Jackson admits he made assumptions based on all the years he’s been doing this work – assumptions about Lux, as well as about his guardians – “and they were all wrong.”

Jackson feels that this case offered a huge lesson for him, and for everyone who followed the story. “It appears so black and white,” says Jackson. “The guy kicked the cat, he’s a bad guy. Everyone invested a lot of time and energy into making assumptions, and the lesson is for all of us to not buy into them.” Jackson ended up spending a great deal of time reassessing the situation, and kept hitting a lot of dead ends along the way.

While he couldn’t go into details about what the episode will show, he told me that this story does not have an ending, at least not yet. “I will be a presence in Lux’s life for the rest of his life,” says Jackson. “I might as well call myself his godfather!” 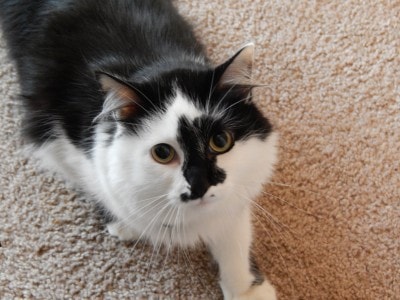 When Jackson revealed that working with Lux reminded him of writing Cat Daddy: What The World’s Most Incorrigible Cat Taught Me About Life, Love, and Coming Clean, his unconventional memoir about Benny, the cat who challenged everything Jackson thought he knew about cats, and about himself, I  truly appreciated just how challenging this case was for him. “I love this cat,” says Jackson about Lux. “Everyone who meets him falls in love with him, which makes this that much harder, because all of a sudden, he’s 911 cat.” Jackson says Lux and the lessons he learned from working with him “will influence the rest of my work, the way Benny did.”

I asked Jackson to put into one word what he would like viewers to walk away with after watching the episode. “Empathy,” said Jackson without hesitation. “I want you to feel empathy for Lux and for the humans, and I want you to reexamine what your initial judgments were.”