Six weeks ago, a young female cat was dropped at the backdoor of our veterinary clinic. It happens, though not often. One of the assistants picked up the box she came in and put her in our isolation ward. We are always cautious about strays; two people are always required to be present if we are going to handle them.

She was alone for a bit while the assistant awaited the arrival of another staff member. When she arrived, they opened the box containing the stranger, who was in the process of delivering kittens. In time, six of them.

We named her June. Her maternal skills were wonderful despite the fact that she was only about 9 months old. She loved people. Human company was better than food. When kittens are raised by a queen who is unafraid of people, they tend to be more easily socialized to humans. We thought we might have stumbled onto an opportunity to raise some really great companions.

The best time to socialize kittens

The precise timing of the “sensitive” period for socializing kittens was found through a series of experiments. Batches of kittens were handled for periods of four weeks starting at different weeks. From this, the investigators identified the sensitive period as beginning at 2 weeks and ending at about 7 weeks. If socialization has begun during this time a cat’s reactions to humans will continue to change over the next couple of months.

Other researchers found that in pet cats the amount of handling received during the sensitive period produced a different effect on their reaction to handling at four months old, but not thereafter, suggesting this aspect of the cat’s relationship with people continues to take shape throughout the first 4 months of life.

The best way to socialize kittens

The number of different handlers that a kitten experiences can also determine his reaction to strangers. Cats that have been handled by only one person will not stay as long with a stranger as cats who have been handled during the sensitive period by four people. After several humans have been encountered, it seems that there is a generalization that transfers to all humans. 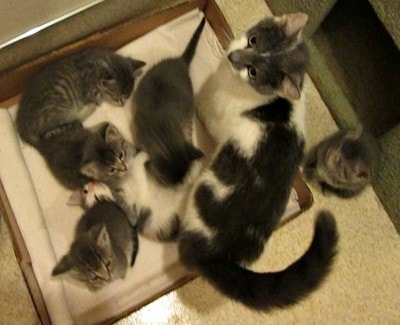 Armed with all this information, we knew we could raise great kittens. June would model for them how safe she felt with humans. Her demeanor around us was perfect for the kittens to see. We had plenty of people thrilled to play with kittens every day.

Now, there are six playful healthy kittens in our adoption room who think that people are pretty fun. They wrestle with each other, follow June around, sleep in piles and play with us. We will find wonderful loving homes for them, and those homes will be richer for it.

Dr. Elizabeth Colleran is a 1990 graduate of Tufts University School of Veterinary Medicine. She holds a Masters of Science in Animals and Public Policy, also from Tufts University School of Veterinary Medicine. In 2011, she was the President of the American Association of Feline Practitioners (AAFP). She is a Diplomate of the American Board of Veterinary Practitioners, Specialty in Feline Practice. As the spokesperson for the AAFP initiative Cat Friendly Practice, she speaks at major conferences around the country.  Dr. Colleran owns the Chico Hospital for Cats in Chico, CA and the Cat Hospital of Portland in Portland, OR.

Photo of June with her kittens by Chico Hospital for Cats, used with permission.

11 Comments on Raising Kittens to Be Happy and Healthy