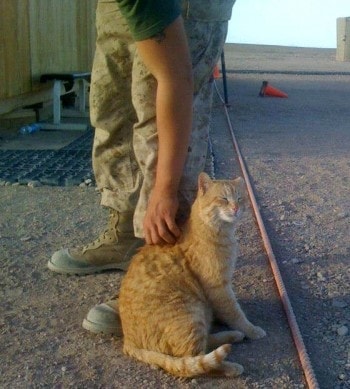 Today is Memorial Day in the United States, a day when we honor the memory of the men and women who have died in military service. It’s also a day to recognize the sacrifices of our military personnel and thank them for their service. And one of those many sacrifices involves leaving beloved pets behind during deployments.

It’s not surprising that many soldiers take care of the stray cats they meet overseas to get a little bit of furry love while they’re away from home. Cats work their magic even in war zones. Even though military regulations prohibit soldiers from adopting stray cats (and dogs), military leaders seem to recognize the value these animals bring to the morale of combat soldiers, and they appear to turn a blind eye to the practice. We’re also seeing more stories of soldiers bringing these rescued cats home to the US with them.

Clyde, the orange tabby in the photo at the top of the post, charmed her way into the hearts of soldiers and contractors at a base in Afghanistan. Read her full story on Love Meow. 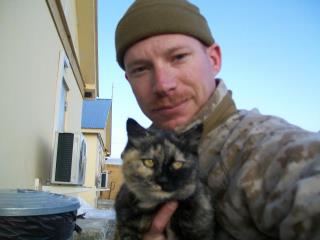 Nowzad, a registered 501(c)(3) non-profit organization, has been instrumental in facilitating rescues such as Clyde’s, as well as Crackers, the tortie pictured above, by helping soldiers bring these strays home with them. They operate the only official animal shelter and clinic in Afghanistan. For more information about their work, and to see more rescue stories, please visit http://www.nowzad.com.

As you enjoy spending time with your cats today, take a moment to remember the service members halfway around the world who are separated from their families, both furry and human, and thank them for their service and sacrifice,

Photo at top of post via LoveMeow, photo of Crackers via Nowzad