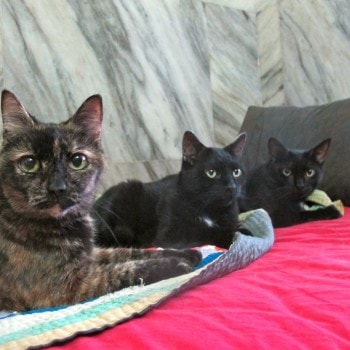 Taking cats to India….three of them! Everyone thought I must be joking….

I’m Australian fashion designer, Lisa Hall. My label, Madame Hall, creates one-off women’s clothing from my home in the remote town of Bhuj in India. I’m living my dream life….but, it was only possible because I could bring my three Australian cats to India with me.

Just over 2 1/2 years ago, I began contemplating a serious life change. I’d fallen in love with making clothes inspired by the textile rich region of Kutch. I was traveling there regularly, but my visits were always short, because I hated leaving my cats, albeit with a cat sitter, at home in Sydney. It was then that I began looking into the possibility of moving to Bhuj, but I would only consider it if bringing my three cats, Spot, Shirley and Steve was going to be possible, too.

Have you ever tried googling “taking cats to India?” I can tell you, there‘s not much out there! All of my cats are rescued senior cats, and timid to boot. Their welfare during the journey was of paramount importance to me, and finding a way to safely move all three turned out to be a huge challenge. 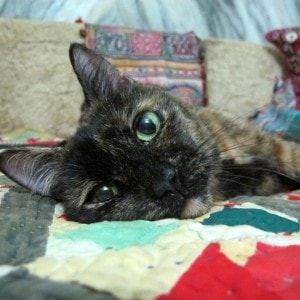 Then I found Fuzzy Wuzzy. They are a family owned company specializing in transporting show dogs in and out of India. Based in Bangalore, they are a long way from Bhuj, but they seemed the kind of company I needed for transporting my precious kitties.

Rishya, my contact at Fuzzy Wuzzy, was amazing. She spends much of her time traveling with animals around the world and even has a private facility for them in the Bangkok airport. She guided me every step of the way, from the necessary vaccinations to paperwork requirements. She anticipated and planned for every aspect of the journey. When the time came for my three cats to leave Sydney, she even came from Bangalore to Sydney to collect them personally, so she could accompany them in to India.

When my three cats left Sydney, their lives, and mine, were destined to be in India. That’s when the “no turning back now” nature of my decision to move countries really hit home. 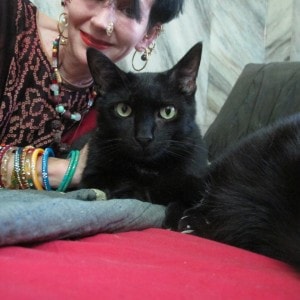 The cats’ journey to Bangalore was punctuated by a stay of several days in Bangkok while a thunderstorm passed, and their nerves settled down. Rishya kept me informed every step of the way. The kitties stayed in Rishya’s family home in Bagalore, waiting for me to arrive and getting my new house ready for them. Spot and Shirley both adjusted to their new surroundings quite quickly. Steve, my most nervous boy, was still very anxious.

Once my new home was ready, the cats needed to make the final leg of their journey. The trip from Bangalore to Bhuj was the most harrowing, as it involved two planes and a long car ride. Rishya put them on the plane in Bangalore to go to Mumbai. Once in Mumbai, they were put on another plane to Ahmedabad. I’d arranged a comfortable big “people mover” type car to pick them up in, and to make the eight hour drive to our new home in Bhuj.

As you can imagine, I was greeted with a chorus of wailing when I met them at Ahmedabad’s cargo delivery depot. They arrived on the back of an open air trailer and we quickly loaded their crates into the comfort of my waiting car. We were all so happy to see each other again! My poor darlings had already been traveling for six hours, and we still had to get home to Bhuj, another 8 hours away.

Thanks to a great driver and good fortune, we were in our new home by midnight. Within a couple of days, all three of them were happily settled and enjoying my new, sparsely furnished house, just like they’d always lived there!

In the two years since moving to Bhuj with my cats, I’ve had some challenges that I didn’t expect, but nothing that I haven’t been able to deal with. The vet experience in Bhuj is different from that in Australia. There are only a few vets, and most are more accustomed to treating cows and goats than cats. Nevertheless, all the medications I’ve needed are easily available, as is cat food. Due to lack of vet availability, I’ve administer rabies vaccinations myself. The closest vet who does surgery is 200 miles away. All my cats are spayed and neutered, and hopefully, they will not need any other surgeries. 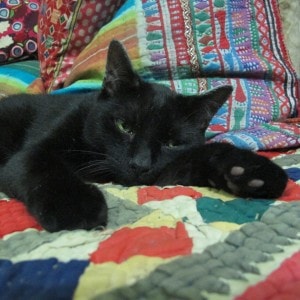 I still have to travel back to Australia occasionally, and each time I go, I hate leaving them behind. I have a wonderful driver who cares for them while I’m gone, and I bring back treats galore for them when I return home.

If my cats are any indication, cats are more easily adaptable than most people think. At least in the case of my three, they seemed to be more attached to their person than their environment, which made a major move like mine not only possible, but successful.

We all live very happily in Bhuj now, surrounded by beautiful vintage embroideries and textiles. We also have a new addition to the family: Mrs. Dog is a lovely old former Bhuj street dog. Spot, in particular, is absolutely enchanted with her.

Whoever would have thought it!

Please visit Lisa’s website to see her latest collection of cool and funky clothes for the urban gypsy.

FTC Disclosure: This is a sponsored post, which means that I was paid to feature this content. Regardless of payment received, you will only see topics on this site that I believe are of interest to my readers.

8 Comments on From Australia to India, With Three Cats