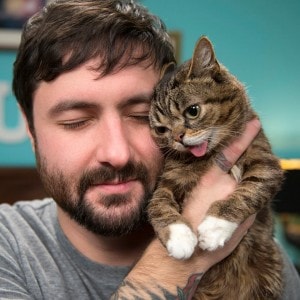 I never met Lil BUB in person, but I, like hundreds of thousands of others (BUB currently has more than 650,000 Facebook fans), fell in love with this amazing little cat via photos and videos. I hope to some day meet Lil BUB in person. She conveys a level of charisma on the printed page and in photos and videos unlike anything I’ve ever seen. I can’t even imagine what it must be like to meet this special little cat in real life.

Since an in-person meeting is not in the cards right now, I had an opportunity to do the next best thing: I got to ask Lil BUB’s “dude,” Mike Bridavsky, some questions.

My guess is that most of you know who Lil BUB is, but for those of you who don’t know her story, BUB was born with several genetic mutations, including a shorter lower jaw and no teeth. She also has dwarfism, which means she will stay kitten-sized for her entire life, and she is the only cat in recorded history born with a rare bone condition called “osteopetrosis”. At two years old, she is fully grown and weighs in at four pounds. She came into Mike Bridavsky’s life when she was eight weeks old.

Did you have cats before BUB came into your life?

Yes, I had 4 cats, all of them rescues (three of them feral rescues): Oskar, Special Agent Dale Cooper, Josie and Vivian. 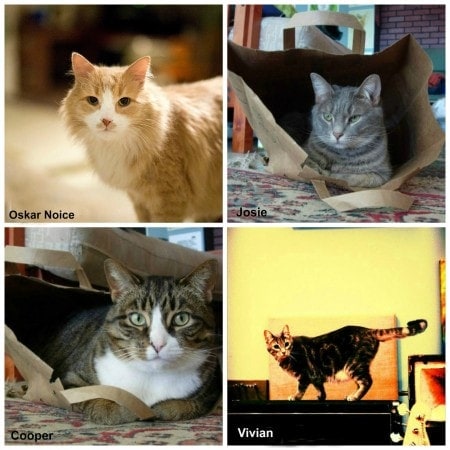 Bub has changed your life in ways I’m sure you never could have imagined. Can you tell us a little about how she came into your life, and how your life has changed since that day?

Well, I had just moved into a small new apartment down the road from my recording studio, which is where I had previously lived with my other cats. It was a huge place, and my cats loved it there, so they continued to live there (and besides, that’s where I spent most of my time). Only a few weeks after moving into the new apartment, my friends sent me a picture of the most amazing little creature I had ever seen, with the caption “you have to come meet this cat”.

So naturally I did. At 8 weeks old, this little kitten was about the size of a hacky sack, had the craziest little face ever, and started purring like a motorboat as soon as I picked it up. I said “Hey, BUB” and it promptly fell asleep on my shoulder. I am referring to BUB as an “it” because at the time we had no idea if BUB was a boy or a girl.

BUB was having a hard time finding a permanent home. She was very small, very strange, and even though she was irresistible, I think people were scared of the responsibility, medical bills, and potential heartbreak that seemed inevitable with a special cat like BUB. At the time, I assumed she would not live a very long life, so I just wanted to give her a home and take care of her. I called my vet the next day, who proclaimed she was “the weirdest cat he’d ever seen”.

How has she changed my life? Well I could write a book on that.

Editor’s note: I hope someday, Mike will write that book. In the meantime, for those of you who want BUB in print, there’s Lil BUB’s Lil Book: The Most Extraordinary Life of the Most Amazing Cat on the Planet. 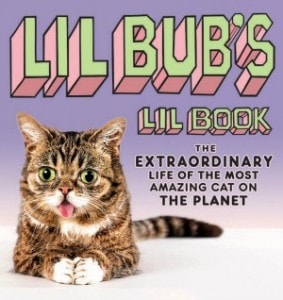 Do your other cats get along with BUB?

BUB does not live with my other cats. I have kept them apart for several reasons, the main one being that for most of BUB’s life she has had extreme difficulty with mobility, requires special food for her urinary health, and is pretty defenseless against cats that are 3-5 times her size.

Recently however, I moved in with my fiancé and her kitten (who is now my kitten too), Spooky. BUB’s mobility has been better than ever, and she seemed to tolerate Spooky more than other cats, so we gave it a shot. There are definitely obstacles and challenges to overcome with them, but they seem to be co-existing. I think with time, and as Spooky grows more mature and BUB continues to get stronger, they will have a peaceful, loving relationship. 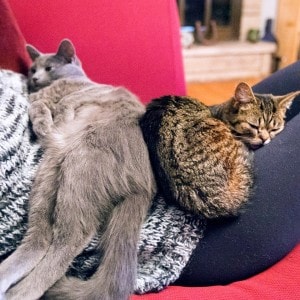 Coming next Sunday:
Part Two: BUB and Her Adoring Public

All photos via BUB’s Facebook page, used with permission

17 Comments on Exclusive Interview with Lil BUB’s “Dude” – Part One: How It All Began