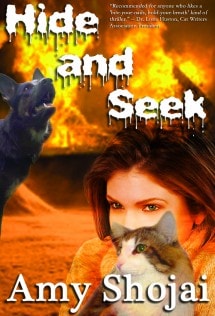 From the time I read the last paragraph in Amy Shojai’s debut thriller, Lost and Found, I could not wait for a sequel. I was thrilled (pun intended) when Amy sent me a review copy of Hide and Seek, and I could not wait to get started – but I also knew from reading the first book that I better set aside a good chunk of uninterrupted time first, because I couldn’t put the first one down once I started.

In this second book, animal behaviorist September Day, her dog Shadow and cat Macy are trying to unravel a mystery involving a mysterious contagious illness that affects both pets and humans, a reality TV show about wild pigs, and September’s dark past.

Eight years ago, animal behaviorist September Day escaped a sadistic captor who left her ashamed, terrified, and struggling with PTSD. She trusts no one—except her cat Macy and service dog Shadow. Shadow also struggles with trust. A German Shepherd autism service dog who rescued his child partner only to lose his-boy forever, Shadow’s crippling fear of abandonment shakes his faith in humans.

They are each others’ only chance to survive the stalker’s vicious payback, but have only 24 hours to uncover the truth about Macy’s mysterious illness or pay the deadly consequences. When September learns to trust again, and a good-dog takes a chance on love, together they find hope in the midst of despair–and discover what family really means.

The sequel lived up to my expectations and then some – and not just because Macy the cat played a more prominent role in this book. While the story line is a bit darker than what I usually like to read, the story is so well-crafted and Shojai’s writing style such a delight to read, I still recommend this even to readers who generally prefer a lighter fare.

The story covers some intense topics, including the frightening scenario of contaminated meat causing dementia or Alzheimer’s like symptoms in pets and humans, and September’s struggle with trying to emerge from traumatic experiences in her past.

Shojai does a masterful job building the tension of the story, but it’s when she writes about the animals that she really shines. Parts of the book are written from Shadow’s point of view, and they’re so well done and vivid, I really felt like I was seeing the world through the eyes of this dog. The passages about Shadow and Macy showcase the author’s extensive knowledge of animal behavior and animal emotions. Macy the cat is all cat, and becomes a crucial element to solving the mystery and rescuing September out a precarious situation – but you’ll have to read the book to find out more.

If you’re a fan of medical thrillers by the likes of Robin Cook or Michael Palmer, you will absolutely love this book. If you enjoy a well-written mystery featuring a lot of animals, you will also love it. Just don’t plan on picking it up unless you have some extra free time.

I received a review copy of this book from the author. Receiving the complimentary copy did not influence my review.

3 Comments on Review: Hide and Seek by Amy Shojai