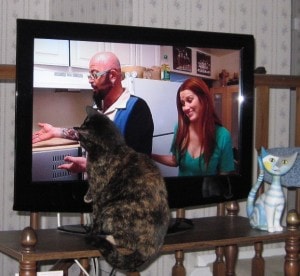 Many pet guardians leave the TV or radio on when they’re not home. They hope that the background sound will prevent pets from feeling lonely, and provide some stimulation at the same time. Leaving the TV on can be beneficial if it’s used in the right way, but it can also be detrimental. Whether or not to leave the TV on really depends on your cats and your lifestyle.

Many pet guardians leave Animal Planet on for their pets under the assumption that it may make their pets feel as if they had company. I believe that for most cats, this may cause more stress than benefit. Cats are territorial animals, and hearing other cats on TV may trigger inappropriate behavior, including redirected aggression against other cats and/or inappropriate elimination and marking behavior. As much as we love Animal Planet’s My Cat From Hell (as you can see from the photo above, Ruby REALLY loves the show!), the sound effects on the show are distressing to many cats.

If your TV is on all day when you’re home, leaving it on while you’re gone may be calming for your cats since it mimics what things are like when you are there. However, if they’re not used to having background noise all day, you may be better off leaving the TV off. If you decide to leave  it on, choose channels that provide fairly consistent programming without too many loud sound effects such as explosions and loud music. You may be better off playing classical music, which has been shown to reduce stress for cats. 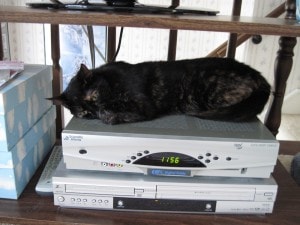 For the most part, Allegra and Ruby are not interested when I watch TV, but there are some things that will trigger a response. If a doorbell rings on a show, both of them will run toward the front door, expecting a visitor. The disappointment on their faces is quite obvious when it turns out that it was a false alarm. Ruby responds to babies crying with what appears to me to be distress: she starts pacing in front of the TV. Ruby also occasionally responds to movement on the screen. As far as they’re concerned, the best thing about TV is the warm cable box.

Do your cats respond to TV?

79 Comments on Do Cats Respond to TV?