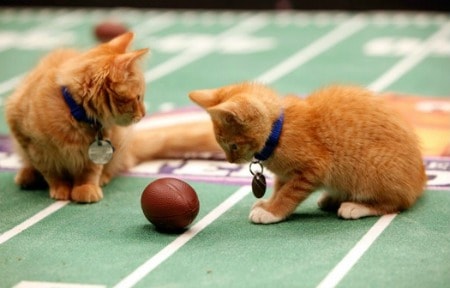 Super Bowl Sunday is going to be more fun for cat lovers this year than ever before. In an epic showdown, Hallmark Channel’s Kitten Bowl will be challenging Animal Planet’s long established Puppy Bowl, which features a Kitten Halftime Show.

The Kitten Bowl will air on the Hallmark Channel at 12 Eastern/11 Central time. The Kitten Halftime Show will air on Animal Planet’s Puppy Bowl, which will kick off at 3pm Eastern/Pacific time. 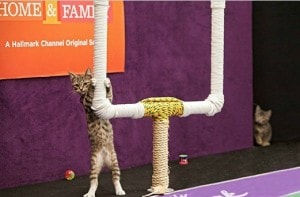 The inaugural Kitten Bowl will feature 60-70 kittens who will compete in obstacle courses of hurdles, tunnels, hoops, jumps, weave poles, lasers, lures and toys on strings. Hosted by TV personality and animal activist Beth Stern, and emceed by John Sterling, the legendary radio voice of the New York Yankees, the even will feature player profiles and “interviews,” and camera work and audio recordings from the athletes as they play the game.

Not to be outdone, the Kitten Halftime Show on Animal Planet will feature appearances by Keyboard Cat and Lil Bub. Keyboard Cat will be performing the Bruno Mars song “Locked Out of Heaven,” and unlike the real Bruno Mars, he won’t need the Red Hot Chili Peppers to back him up.

And there’s always hope that some of the commercials during the “real” game will feature cats – I guess we’ll just have to watch and see. 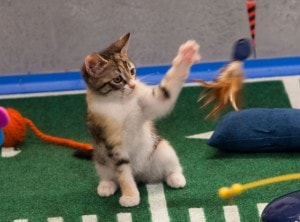 If you’re a Seahawks or Broncos fan, good luck to your team. But even if you’re not a football fan, this Super Bowl Sunday, you’ll finally get to participate in what has arguably become one of America’s biggest holidays without having to fake your enthusiasm!

Which one will you watch: the Kitten Bowl or the Kitten Halftime Show?

10 Comments on Super Bowl Sunday Goes to the Cats