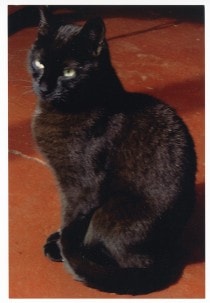 Blood clots are a potentially deadly complication of heart disease. These clots can form when changes in the shape of the heart walls cause blood to move through the heart in an abnormal flow pattern, leaving stagnant spots were coagulation can occur. The vast majority of these clots lodge at the very end of the aorta, the biggest artery in the body, where it branches off to supply the rear legs and tail. When this happens, the affected cat will be literally fine one second and paralyzed the next. The pain is excruciating. This is a life-threatening crisis with a very poor prognosis for survival. It is a frightening scenario for any cat guardian.

It is estimated that between 200,000 and 600,000 cats develop blood clots every year. Only one third will survive the first blood clot, and many are likely to have a recurrence.

Dr. Daniel Hogan led the trial by looking into the efficacy of two drugs which are widely used for the treatment of blood clots in humans, Plavix and aspirin. Plavix was found to be the most effective; cats on Plavix were able to live an average of a year past their first blood clot.

“Midnight got a second lease on life,” said Midnight’s guardian, Dru Sawyer. “Despite losing a leg, soon he was running, climbing and playing with the other cats. Dr. Hogan’s study gave him a new option to be helped and to live.” Midnight considerably exceeded his estimated prognosis of three months: he lived for an additional six years because of Plavix. He died from unrelated causes.

This study is only one of many funded by Morris Animal Foundation, a nonprofit organization that invests in science that advances veterinary medicine for companion animals, horses and wildlife. Studies funded by the foundation have helped to discover a better diet for diabetic cats, improve management of respiratory illness in shelters, and develop tools to better diagnose and treat cats with inflammatory bowel disease and gastrointestinal cancer.

For more information about Morris Animal Foundation, and to donate to support their efforts, please visit http://www.MorrisAnimalFoundation.org.