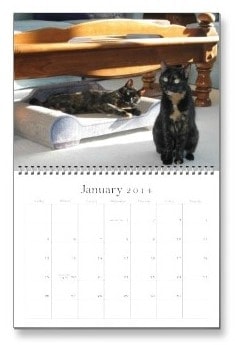 When I asked Allegra and Ruby about their New Year’s Resolutions, they gave me a funny look. Allegra said New Year’s Resolutions are a silly human invention. She said cats live in the moment and don’t worry about what they should be doing next, so they don’t need resolutions. Ruby said she resolves to get more treats this year.

I stopped making New Year’s resolutions several years ago. Since I still like the idea of the “fresh start” a new year offers, I set New Year’s intentions instead. I think New Year’s resolutions are destined to fail, because there’s an inherent flaw in the term “resolution.” According to Merriam Webster, the definition of resolution is “the act of determining.” There’s nothing there that says we’re actually going to do something. This is why I prefer to set New Year’s intentions. The definition of intention is “a determination to act in a certain way.” The difference is subtle, but one (intention) implies that we are actually determined to do something differently, whereas the other (resolution) simply states that we’ve decided to change something.

My intention for this year is to make setting intentions a daily practice, rather than a once a year exercise. At the beginning of each day, after I spend some time meditating and clearing my head, I will set the intention for that day. This is not so much a to do list, as it is setting the tone for the day ahead. Rather than focusing on getting x, y and z done, I will focus on how I want to accomplish the day’s tasks, and on making sure that there is balance in my day. For me, that includes making time for reading, time with friends (some days this may only happen online, other days, it will happen in “real life,”) and of course, time for Allegra and Ruby, in addition to work. At the end of each day, I’ll evaluate whether I’ve followed my intentions, or whether things need to be tweaked for the next day.

Allegra and Ruby think this is much ado do about nothing. Allegra says if I just focus on living in the moment, all the rest will fall into place. Ruby says she’ll intend to get more treats every day.