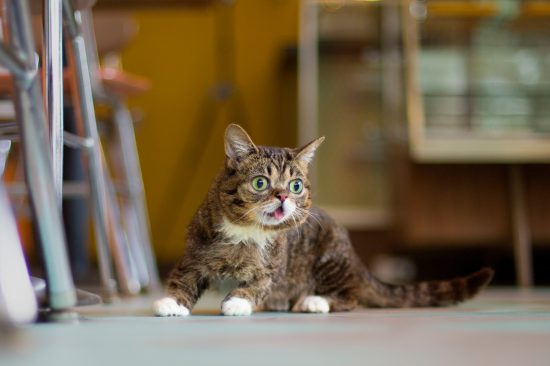 It seems that there’s a new feline celebrity on the internet every day. A photo or a video clip goes viral, and before you know it, a meme is born. Among all of these internet cat celebrities, Lil Bub, a dimunitive brown tabby with a protruding jaw and no teeth, stands out.

Bub was discovered in a tool shed in rural Indiana. She was the runt of an otherwise healthy feral litter, and was taken to a vet when it became clear that she would need special care.

Bub was born with several genetic mutations, including a shorter lower jaw and no teeth. She also has dwarfism, which means she will stay kitten-size for her entire life. At two years old, she is fully grown and weighs in at four pounds. Bub is also polydactyl, which means that she has extra toes, in her case, one extra toe on each of her four paws.

Bub’s human, Mike Bridavsky, who Bub refers to as her “dude,” first met Bub when she was eight weeks old. She weighed six ounces at the time, which is tiny even for a kitten that young. His vet warned him that she would need a lifetime of special care, but, writes Mike in the the introduction to the book Lil Bub’s Little Book: The Extraordinary Life of the Most Amazing Cat on the Planet, “after spending ten minutes with her sitting on my chest, purring like a motorboat, I knew I would do anything to help this remarkable critter.”

From rescued kitten to internet celebrity

Bub’s rise to stardom began in November 2011, when photos of her posted on Tumblr went viral on social network Reddit. Since then, Bub has become the head of a media empire. She has her own online TV show, her Facebook page has more than 500,000 fans, and she has her own book, Lil Bubs Little Book: The Extraordinary Life of the Most Amazing Cat on the Planet and full feature movie, Lil Bub and Friendz.

This unintentional internet celebrity uses her fame to give back. Bub has become an advocate for homeless and special needs pet around the world. According to a statement on her website, Bub has raised more than $60,000 for various charities through her online store and appearances at animal shelters all of the country while spreading awareness about the importance of adoption, and spaying and neutering your pets.

People who have been fortunate enough to meet Bub report that she captivates hearts in a matter of moments. Robin Olson, who writes the blog Covered in Cat Hair, met Bub at a book event in New Jersey. “Meeting Bub was transformative,” said Olson. “Being in her presence is a gift I will always cherish.”

In a world of instant celebrities that come and go, Lil Bub is the real deal. In her own way, this small cat is making the world a better place.

4 Comments on The Amazing Story of Lil BUB