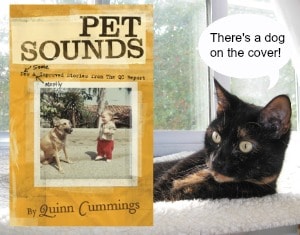 I know, Allegra, I know. But despite the d-o-g on the cover of Quinn Cummings’ Pet Sounds: New and Improved Stories from the QC Report, this collection of stories, drawn from Cummings’ popular blog, The QC Report, features plenty of cats. Additionally, it’s such a funny and at the same time insightful book, I just had to share it with you.

The author writes about a lifetime of living with, and rescuing pets, ranging from Polly, the dog whose “dayplanner would have only three entries: Eat. Sleep. Excrete.” to bloodthirsty rabbits to lizards rescued from the dead. Of course, the cat stories were my favorites, especially those featuring Lulabelle, also known as Lupac, a portly middle-aged black cat with a relentless hunting drive. “Had she been human, she would have been a dour workaholic who spends her rare off-work hours flipping through feline trade magazines like Small Prey Monthly or Professional Dog Smacking.”

This is a feel-good book about a woman who truly loves animals, and who often puts her own needs last to help the critters in her care. Even though the book is funny much of the time, it also takes an honest look at what it really means to love and live with pets. Cummings doesn’t pull any punches when it comes to looking at the less than glamorous and often painful parts of sharing your life with pets.

One of my favorite passages in the book is one about two rescue kittens, Diana and Anne, and not just because Anne is a tortie. The piece is representative of Cummings’ unique brand of humor. After rescuing the two kittens, Quinn was concerned about how Lupac would react.

“For several days, they were respectful; she ignored them. But, as all Westerns have taught us, eventually someone will come gunning for the big guy. Two nights ago Lupac, having finished her wet food, jumped down on to the floor [she was being fed on top of the washer] and started to leave. Anne, the braver or possibly more stupid of the kittens, snuck up behind Lupac and placed her paw on Lupac’s tail.

Then, I looked at Anne and thought, “You aren’t that dumb. Krill isn’t that dumb. Take your paw off her tail, run for someplace small and pray to whatever God takes your calls that she’s doesn’t eat you.” Anne looked at me in triumph. “I’m the boss of her!”

Finally, I looked at Lupac, who was already looking steadily at me. “Please,” I implored her with my eyes, “don’t eat her. She’s very young, it would be disturbing for me to watch and I think she’s nearly all gristle.”

You’ll have to read the book to find out how this episode ended.

This book will make you laugh out loud at times, and frequently nod your head in recognition. I didn’t expect Pet Sounds to be the kind of book I couldn’t put down, but it was. And when I finished it, I was a little sad that I was done. I’ll be picking this up again and again when I feel that I need a good laugh.

Quinn Cummings is an Oscar-nominated actor (The Goodbye Girl, Family), and a critically acclaimed author and humorist. She generously offered up an autographed copy of Pet Sounds for one lucky reader.

Enter to win an autographed copy of Pet Sounds

To enter the giveaway, tell me why you’d like to win Pet Sounds. For an additional chance to win, share this giveaway on Facebook, Twitter, Google+ or Pinterest, and leave a separate comment for each social network, letting me know that you shared. Please don’t post the link to your share. This giveaway is only open to readers in the United States, and ends Friday, December 20. Winners will be chosen by random drawing*.

Photo of  Diana and Anne by Quinn Cummings, used with permission.

33 Comments on Review and Giveaway: Pet Sounds by Quinn Cummings