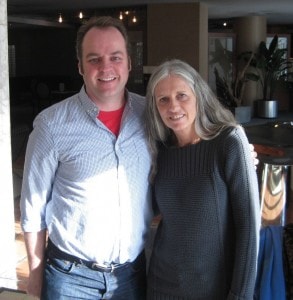 On Sunday, I was lucky enough to be one of only a few local media members to get a private interview with Simon Tofield, the creator of Simon’s Cat, before his public event at Politics and Prose, an independent bookstore in Washington, DC. Even though Simon, who was in the middle of a US book tour, had just arrived from Miami, he made time to chat with me for an hour.

Simon’s Cat vs. The World

My first question was about Simon’s new book, Simon’s Cat vs. The World, which features Simon’s white cat in color for the first time: I was curious how he liked working in color, after doing the films, as well as the earlier books, in black and white all these years. “I loved doing the book,” said Simon. “Even though I kept the cat white, color allowed me to do so much more with the other characters.” Simon’s true love is wildlife, and he really enjoyed being able to bring all the non-cat characters in the book to life. I asked how doing a book differed from doing the animated films. “The biggest difference is that in the films, each animation is one gag,” explained Simon. “In the book, each page is a different gag.” “I only had three months to do the book,” he added, “and I kept begging them for more weeks!” 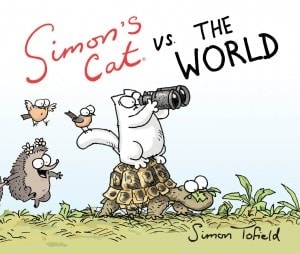 How it all began

I asked Simon to go back to when it all began. “I had a kitten named Hugh, who would sit on my chest and wake me up every morning,” said Simon. “One day, I was learning a new piece of software, and started drawing what eventually became Cat Man Do.” A website in the US asked Simon whether they could use the clip as a test. Two days later they called him and said that the clip had gotten more than 30,000 views each day, and that their servers kept crashing. “I started to think that maybe I had something,” laughed Simon. Someone had already copied the clip to YouTube, and the rest, as they say, is history. As of this writing, Cat Man Do has more than 45 million views.

Making a film is not as easy as it would seem. The films are hand-animated, frame to frame, using Adobe Flash software. It takes between 12 and 25 drawings to create just one single second of a Simon’s Cat film. Simon currently has several animators helping him with the films. He actually enjoys doing the books more than the films. “The books are so much more personal,” said Simon. “They’re my babies!” The books allow him to incorporate childhood memories of gardens and pets that are no longer with him, and, of course, his beloved wildlife. 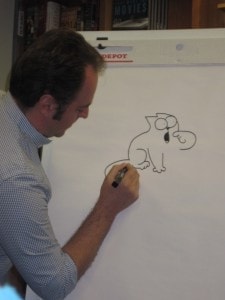 Who is the real Simon’s Cat?

There is no real white cat in Simon’s life. Simon’s Cat is based on all of his cats, both past and present. “Simon is everyman’s cat,” said Simon. “I found that when people talk to me about the cat, women usually use ‘she’ and men use ‘he.’ Not giving the cat a name or even a gender helps everyone connect with the cat on a personal level.”

Simon shares his home with four cats. Jess, a 13-year-old tortoiseshell, is the oldest of the group. She’s Simon’s lapcat. He calls Jess a “naughty tortie,” so of course, I had to explain about tortitude. Simon was aware of torties’ reputation, but had not heard the term before. In true tortie fashion, Jess demands attention on her own terms, and her favorite time is bedtime, which Simon calls her “fuss time.” She likes to sleep on his hands, and she will paw at the duvet cover if things aren’t just right until Simon moves his arms into the proper position. And apparently Jess is true to her tortie nature by being very talkative. “All the noises in the films come from her,” laughed Simon.

Maisie is a 9-year-old grey and white tabby. “She’s a bit grumpy,” laughed Simon, and “she also doesn’t meow. She just opens her mouth, and nothing comes out.” Simon demonstrated Maisie’s silent meow. “Maisie loves to bury her food,” said Simon. “One time, I fed the cats in the garden on the gravel because I had some work done in the house. When I came back outside, there were three empty dishes, and then there was this hill of gravel where Maisie’s dish had been!”

Hugh, the kitten who inspired Cat Man Do, is a jet black cat. “He’s the greedy one,” said Simon. “He’s a cobby (compact) cat. You can set your clock by him. At 8pm, he knows it’s dinner time.” Simon demonstrated Hugh’s “dinner call,” which sounded exactly like Simon’s Cat in the films. “I don’t know how he knows,” marveled Simon, “but he’s always right there at 8pm.” Simon shared another endearing trait of Hugh. “When he was little, he used to suckle on my ear. It was cute when he was tiny, but he still did it when he was a big cat. I tried to get him to stop, but he was so unhappy that I started to let him do it again. It changed who he was when I tried to stop him. Now he’s so happy again. He kneads me with his paws, so I have to hold his paws in my hands so he doesn’t scratch me,” added Simon. Simon used Hugh’s ear suckling in Cat Man Do, although the cat in the film pulls on his ear. “I wasn’t sure whether everybody would understand suckling behavior,” said Simon. 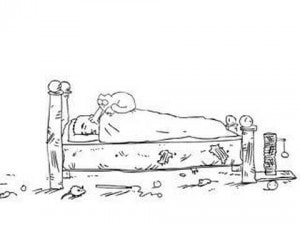 Teddy, the most recent addition to the family, was an unintentional rescue. Simon really felt that three cats was enough – and then he started doing some work with the rescue group where he had gotten Maisie. “Some of the cats I saw there really stayed with me,” said Simon. “I’d call occasionally to check on the cats, and I got lured in by their stories.” One story in particular touched Simon’s heart: a box of kittens had been left in an open field. Simon ended up picking the fluffiest black kitten in the litter, because he knew black cats would be harder to adopt out. “Teddy’s coat is all black,” said Simon, “but it goes red when he sits in the sun.” Teddy became the inspiration for Simon’s Cat in Kitten Chaos.

What’s next for Simon Tofield?

I already knew from watching the films that Simon really understands cats, but hearing him talk about his own cats made me appreciate just how much this man loves cats. After a while, he even pulled out his phone to show me pictures of the cats. He shared that he had just moved, and how he now has a big garden with a lawn and trees. “It’s paradise for the cats,” he said. Hugh recently discovered a vole hole in the garden. “He sits by that hole all day long,” laughed Simon. “He’s already caught a couple of them, but I guess he keeps hoping for more.” I’m wondering whether we’ll see a new Simon’s Cat film featuring a cat sitting by a vole hole in the near future?

I asked Simon what’s next for him. “More of the same, really,” said Simon. “I want to grow the company and hire more animators so we can make more films more regularly.”

Before I left, I asked Simon to sign my copy of Simon’s Cat vs. The World. He took the pen I’d used to take notes during the interview from me and started drawing. In less than five minutes, he’d drawn all his cats in the book for me (click on the image to enlarge). 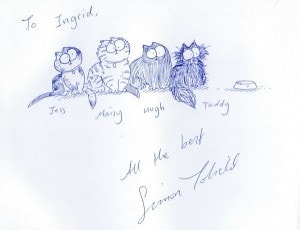 Later in the afternoon, I watched Simon give his book talk. He shared stories about his cats, demonstrated how he draws, graciously answered audience questions and signed books for the appreciative crowd. The video clip below shows Simon drawing.

When it comes to internet cat celebrities, Simon Tofield is the real deal. He appears to be taking his fame and fortune in stride. To me, it seemed that at heart, Simon Tofield is just a regular guy who really loves and understands cats, and who is able to share that love through his incredible talent. I can’t wait to see what comes next for Simon Tofield and his famous cat.

Photos of Simon Tofield’s cats via the Simon’s Cat website.

17 Comments on Up Close and Purrsonal with Simon Tofield, the Creator of Simon’s Cat