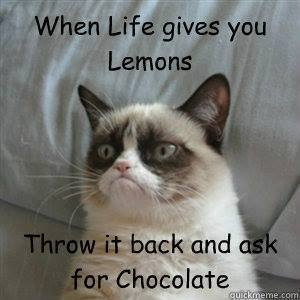 Grumpy Cat’s owners had no idea what was in store for them when they posted a photo of the cat, whose real name is Tardar Sauce, on social network Reddit in September of 2012. Since viewers suggested that the original photo was probably photoshopped, Tardar’s owners posted a series of videos on YouTube. They quickly went viral, and a meme was born.

What is the appeal of Grumpy Cat?

It’s almost impossible not to laugh at Grumpy Cat’s expression. As her internet fame grew, people came up with increasingly funny memes using the small cat’s face. One of the most popular Grumpy Cat meme is the one that is captioned to say, “I had fun once. It was awful.”

As of the writing of this article, Grumpy Cat has more than a million Facebook fans and Twitter followers. She has a merchandise ranging from apps to t-shirts, mugs, magnets and more. She even has a line of coffee drinks named Grumpucchino™. She has a book out, and she signed a movie deal.

Tardar’s owners aren’t exactly sure what breed Tardar is. She looks like a snowshoe or a Ragdoll, but her parents were a calico and a grey tabby. Her small size and grumpy face are due to feline dwarfism, which may also be the reason why she wobbles a bit on her hindlegs when she walks. She is said to have a very sweet personality.

Tardar is a calm and mellow cat who travels well, but Tardar’s owners try to limit her public appearances. They make sure that these public sessions are short, and that Tardar isn’t handled by too many people. According to her owners, she lives the life of a normal pet cat. She plays, hides and acts like a normal cat. Photo sessions are kept short and limited to about once a week.

There’s no telling what makes a cat so popular on the internet, but it’s hard not to love this grumpy looking little cat.

This article was originally published on Answers.com and is republished with permission.

11 Comments on Why the Internet Loves Grumpy Cat