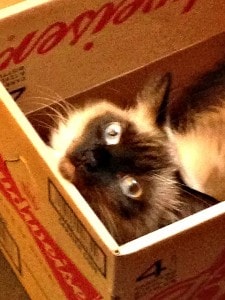 We have something a little different for you today. The adorable kitty above is Pangur Ban. I recently did a nutritional consultation for him and his human. Pangur Ban was itchy and had a sensitive tummy. Nothing his veterinarian had recommended was working, so his human asked for my advice. I’m happy to say that Pangur Ban is doing much better on a novel protein diet: his itching has improved dramatically, and his stools have normalized as well.

Pangur Ban’s human, Holly Golightly, is a cartoon artist. She created this cartoon for us, and graciously allowed me to share it here. Is this cool or what!

Holly Golightly grew up in New York City and graduated from Marymount Manhattan College with a degree in Acting. Navigating careers in Education, Fashion Design and Children’s Entertainment, Holly finally followed her Bliss into Comic Books.  She has worked on many well known characters, some of which are Sabrina, the Teenage Witch, Cheryl Blossom, Josie & the Pussycats , Betty& Veronica and Cosmo Girl. Currently residing in PA with her True Love, Husband Jim Balent, and kitty Pangur Ban, she is VP to his company, BroadSword Comics as well as colourist on Tarot, Witch of the Black Rose and creator of her own projects, VAMPFIRE, School Bites, which is now a webcomic and Fears & Ears, a travel guide for the Goth & Geeky. Please visit http://www.schoolbites.net to see more of Holly’s work.