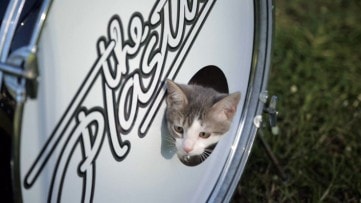 I love music, especially rock music. I like pretty much every genre of rock, from classic to alternative to heavy metal. But rock music and cats don’t always go together, especially since most cats don’t like loud noises (I make sure I only blast my music at top volume when I’m in my car, away from Allegra and Ruby’s sensitive ears.)

When Sasha Righini, the drummer for the indie rock band The Plastics from Cape Town, South Africa, contacted me about a new music video the band had recorded, I thought for sure that this was just another one of those pitches that I get every day from someone who wants to promote their product on The Conscious Cat, even though it has nothing whatsoever to do with cats.

But hey: when a rock musician emails me, I’m at least going to take a look. And what I discovered was so delightful, I just have to share it with you: The Plastics’ new video, Occasional Lies, features 29 cats!

The video is absolutely wonderful. It looks like all the guys in the band are total cat guys. And I also really love the music. But see for yourself:

For more information about The Plastics, please visit their website. You can also find The Plastics on Facebook and Twitter. If you enjoy their music as much as I do, you can buy their album on iTunes.