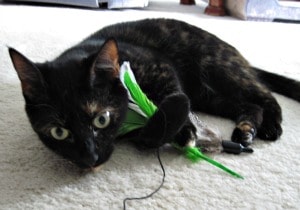 Interactive toys are a great way to keep your cats stimulated both mentally and physically, and a great way for both you and your cats to get in on the fun. One of Allegra and Ruby’s favorites is the DaBird – of all their wand toys, this is the one they most frequently want to play with.

We were delighted when Pets Can Play sent us two of their new Bird Catcher PRO toys, along with two 5-packs of their Super Guinea Fowl Feather Refills. I was pretty sure Allegra and Ruby were going to love these toys, but I was also curious how they would compare to the original DaBird.

The Bird Catcher PRO has slightly thicker and stronger pole than the original. It has a nice padded section at the end, which makes it much more comfortable to hold than the original. The two-piece rod connects snugly, but also comes apart easily, which comes in handy if you want to store it in more compact spaces. (You should never leave interactive toys out when you’re not playing with your cat; cats can become tangled up in the string.) I also liked that the Bird Catcher PRO pole is white – a nice change from the black of the original, but obviously, that’s just a personal preference. Another nice touch: the toy comes in a canvas storage bag, so if you’re super organized, you can stash the toy away inside the bag when you’re not using it.

Of course, the real test would be whether Allegra and Ruby liked the toy. Did they ever! It’s a good thing I had two of them. It’s a little hard playing and taking photos or video at the same time, but the video of Allegra playing with it below gives you an idea of how much she enjoyed it, even if it doesn’t do the toy justice. They both truly went absolutely nuts pouncing and jumping after it.

The Super Guinea Fowl Feather Refills are fantastic. They seem a bit sturdier than the original DaBird refills, although I haven’t had them long enough to judge durability. They can be used with the Bird Catcher PRO rods, as well as the original DaBird or NekoFlies rods, but they work better on the DaBird rod.

I had one issue with the refills: they come with an elastic string. I detached the string for use with the original DaBird pole and used the string that came with the pole, and that worked great. I attached another one, with the elastic ribbon, to a Neko Flies pole, and found that it doesn’t maneuver as well as it does on the solid string that comes with the DaBird pole. But what was worse, during one play session, Allegra’s leg got tangled up in the elastic, and it got a little scary trying to untangle her. All is well, but I would not recommend using them with the elastic ribbon. Pets Can Play assured me that they will remove the elastic string with their next production run and replace it with a different string that is non-elastic but provides more control. I love it when a company is this responsive to consumer feedback.

If you don’t already have a DaBird toy, I highly recommend getting the Bird Catcher PRO instead. While I haven’t had the refills long enough to be able to tell whether they’ll last longer, they do seem to be better quality than the original DaBird refills.

Both the Bird Catcher PRO and the refills are available for purchase from Amazon.

FTC Disclosure: I received this product for review at no charge. I also received a small fee for writing this review. Receiving the free product and the fee did not influence my review. All reviews on The Conscious Cat will always reflect my honest and unbiased opinion.