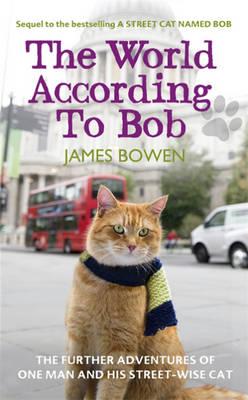 I fell in love with Bob, the ginger (orange) tom cat and his human, James Bowen, when I read A Street Cat Named Bob last spring. The story of a down on his luck street musician who was busking the streets of London with his cat captured my heart – and the hearts of millions of readers around the world. A Street Cat Named Bob became an international bestseller which has been translated into 25 languages. The book debuted in the US last week, and immediately landed on the New York Times Bestseller List.

I have been following James and Bob on their Facebook page, and I was thrilled to find out that a second book was in the works. I pre-ordered The World According to Bob: The Further Adventures of One Man and His Street-wise Cat as soon as it showed up on Amazon. And like the first book, I couldn’t put this one down.

James and Bob have been on a remarkable journey together. James Bowen went from being a homeless drug addict to a bestselling author. The pair’s public events draw hundreds of people. James has partnered with Blue Cross, a UK pet charity who helps thousands of animals each year through their network of animal hospitals and mobile veterinary clinics. James and Bob will be supporting the charity through public events and book signings. During their early years together, James and Bob attended the charity’s weekly mobile clinic in Islington Green, where James enlisted Blue Cross to help microchip Bob and give him general check-ups.

The second book picks up where the first one left off. Bob and James continue their partnership of selling copies of Big Issue, a newspaper published on behalf of and sold by homeless people to help them get a step up in life. Life on the streets is often filled with strife and danger, and Bob becomes James’ guardian angel on more than one occasion. Bob is by James’ side as he faces some serious health issues. One of the most touching scenes in the whole book is the moment when Bob sees James after James is released from the hospital – I dare anyone to read that passage without tearing up.

As the book draws to a close, Bowen discusses the publication of his first book, and the many ways in which his and Bob’s life have changed since then. I had often wondered over the past year what it must have felt like for James to go from homeless drug addict to celebrity author. Not surprisingly, success seems to have kept James humble. “I was lost to the world and had forgotten what was important in life,” James told The Daily Express. “Now I’m stepping unsteadily into the future. Bob is always there to offer guidance and friendship.”

This book, just like the first one, will take you from tears to laughter and back, often on the same page. As I said in my review of A Street Cat Named Bob, following the journey of these two soul mates is pure joy. I will never stop marveling at how much one small cat can change a life, and I wish James and Bob continued success as they enter the next phase of their magical journey.

The World According to Bob in the US. It is currently only available through resellers. You can purchase the Kindle edition through Amazon’s UK website.

Click here to read my exclusive
interview with James Bowen

7 Comments on Review: The World According to Bob by James Bowen