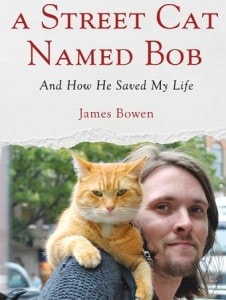 James Bowen and his cat Bob have been capturing hearts since A Street Cat Named Bob: And How He Saved My Life was first published in the UK last spring. The book finally debuts in the United States today. Even though the US publisher changed the original subtitle to How One Man And His Cat Found Hope on the Streets, the story remains the same, and is no less compelling with a new subtitle and cover.

I reviewed the UK edition last year, and have been following the unfolding story of James and Bob since then – I just can’t get enough of this modern day fairy tale. From book signings with lines snaking around the block to a movie deal, James’ life changed in ways he never could have imagined when he first found Bob on the doorstep of his apartment building. James was living hand to mouth on the streets of London, and had just moved into subsidized housing as part of a drug recovery program after being homeless. The last thing he needed was a pet. But he just couldn’t turn his back on the injured cat, so he took him in and nursed him back to health. He never intended to keep him. Once Bob had recovered, James sent him on his way.

But Bob had other plans. He kept coming back to the apartment building, and followed James everywhere. Soon the two became inseparable, and Bob began accompanying James on his daily trip to work into London via bus and Tube, the London underground metro system. The two became a fixture and familiar sight to many Londoners. People were charmed by Bob, and James started earning more money for his performances than he ever had before. Eventually, James got a job selling Big Issue, a newspaper published on behalf of and sold by homeless people to help them get a step up in life. Bob always tagged along.

This book has joined my very small list of best cat books of all time. The uplifting story touched my heart. The bond between James and Bob is so incredible, it brought tears to my eyes at times. As much as I love cat books, it’s rare that I come across one that I just can’t put down. I couldn’t stop turning the pages of this one. Following the journey of these two soul mates is pure joy. I only wished that I lived in London, so I could actually meet Bob. Oh, and James, too.

If you’re not convinced yet that you have to read this book, take a look at the book trailer:

And if you’re like me, and can’t get enough of Bob and James, join them on their Facebook page.

To enter the giveaway, tell me in a comment why you’d like to win this book. For an additional chance to win, tweet about this giveaway or share on Facebook, Google+ or Pinterest, and leave a separate comment letting me know that you shared. No need to post the link to your share.This giveaway ends Tuesday, August 6, and is limited to readers in the United States only *.