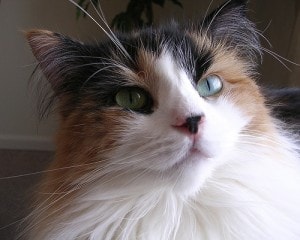 When someone is allergic to cats, the most common advice given by physicians is to get rid of the cat. Allergies are also one of the top five reasons why cats are returned to shelters. However, according to the American Academy of Allergy, Asthma and Immunology, nearly 10 million people choose to share their homes with cats and dogs despite being allergic.

Contrary to what most people believe, cat allergies are not caused by cat hair, but  by a protein called Fel d1 found in a cat’s saliva, urine and dander (dried flakes of skin). Researchers at the University of Cambridge found that when the dander is released in the presence of a common environmental bacterial toxin called lipopolysaccharides, or LPS, it activates an immune receptor called TLR 4, triggering allergic reactions, which can range from itching and sneezing to asthma attacks.

“How cat dander causes such a severe allergic reaction in some people has long been a mystery,” said Clare Bryant, the lead author of the study. “Not only did we find out that LPS exacerbates the immune response’s reaction to cat dander, we identified the part of [the] immune system that recognizes it.”

The researchers then used a drug that inhibits TLR 4 and blocked the allergic response. “As drugs have already been developed to inhibit the receptor TLR4, we are hopeful that our research will lead to new and improved treatments for cat and possibly dog allergy sufferers,” Bryant added.

Currently, allergy sufferers can alleviate their reactions with antihistamines, which come with side effects such as drowsiness and nausea, or with immunotherapy (allergy injections), which may have a negative effect on their immune system. The Cambridge discovery could lead to the creation of new drugs that could block the allergy reaction, rather than treating the symptoms.

The study was published in the Journal of Immunology.

Are you allergic to cats? How are you managing your symptoms?