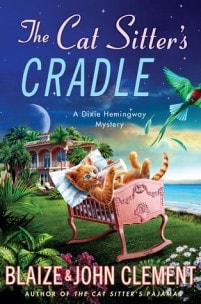 The Cat Sitter mystery series, featuring Dixie Hemingway, a pet sitter who lives on one of the Florida keys, has been a favorite of mine ever since the cover of the first book in the series, Curiosity Killed the Cat Sitter, caught my eye.  The series was authored by Blaize Clement, and after she passed away in 2011, her son, John Clement, continued the series. Blaize had been collaborating on plots and characters for future novels with John.

The Cat Sitter’s Cradle is the latest in the series. Do covers get any more adorable than this one?

No mission is impawsible for pet sitter Dixie Hemingway (no relation to you-know-who). On an early morning walk, she spots an exotic bird rarely seen north of the equator, much less in the sleepy beach-side town of Siesta Key, Florida. At first, Dixie thinks the bird has been blown off course by a terrible storm, but as she digs deeper into where the bird came from, Dixie becomes increasingly suspicious of its origins. When one client is found dead and a new friend and her baby disappear without warning, Dixie is pulled into a whirlwind of greed, deception, and danger. The eighth in this popular cozy series, John Clement and Blaize Clement’s The Cat Sitter’s Cradle, will keep both newcomers and loyal Dixie fans perched on the edge of their seats.

“Perched on the edge of your seat” doesn’t even begin to describe just how good this book is. Let me warn you right now: do not start this book unless you have a good chunk of uninterrupted time available. I found it really hard to put down, and some chores were left undone until after I finished it.

I love everything about this book: a tightly plotted mystery, interesting characters, and a beautiful setting. I like Dixie more with each book in the series. For me, one of the best parts of reading series mysteries is following the development of the protagonist, and the Clements have done a masterful job with Dixie. And it’s rare that a mystery series ends with a cliffhanger involving the protagonist, but this one does. You’ll just have to read the book to find out what I’m talking about.

John Clement generously offered to give an autographed copy of
The Cat Sitter’s Cradle to one lucky reader!

To enter the giveaway, tell me in a comment why you’d like to win this book. For an additional chance to win, tweet about this giveaway or share on Facebook, Google+ or Pinterest, and leave a separate comment letting me know that you shared. No need to post the link to your share.This giveaway ends Friday, July 19, and is limited to readers in the United States only *.

56 Comments on Review and Giveaway: The Cat Sitter’s Cradle by Blaize and John Clement