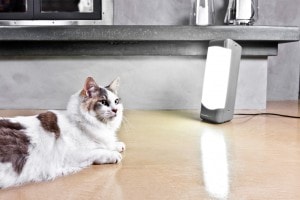 Research on the human side has shown that bright light therapy, which involves daily exposure to intense doses of white light, regulates seasonal mood swings, improves sleeping patterns, and produces a general sense of well-being.

Max Marvin, the founder of Pawsitive Lighting, experienced the benefits of light therapy firsthand when he was battling severe insomnia. A sleep specialist suggested that he try light therapy. Max lives in Portland Oregon, where sunlight can be scarce, so the idea was that it could help set his sleep cycle by mimicking the sun. In addition, light therapy balances melotonin production, which is an important component of healthy sleep.

After only a week, Max noticed a difference. He found the light to be incredibly invigorating and an excellent way to liven his spirits every morning. He also started sleeping better.

What he also noticed was that his dog Luke would be consistently basking by his side each morning.  Whenever the light was out, so was Luke.  That’s when something clicked for Max. “We all notice, and often laugh at our pets following a single stream of light throughout the house,” said Max, “but why is this?”

Max did some research, and talked to established veterinarians. It turned out that similar to humans, animals also require sunlight, and those who don’t receive enough, can suffer from seasonal affective disorder.  Max found this fascinating, and was curious what veterinarians were doing to treat these animals who were suffering from a lack of sunlight.  What he found was that increasingly vets prescribe Prozac and other antidepressants in an attempt to boost pets’ serotonin levels.

The idea of treating pets with a safe and natural remedy as opposed to pharmaceuticals with potentially dangerous side effects appealed to Max, and he founded Pawsitive Lighting. He teamed up with a manufacturer in England who had experience in developing high quality light therapy devices, and they designed the first ever light therapy box made specifically for pets.

Here’s a testimonial from a cat guardian who has successfully used the Sol Box:

I was desperate for some help for my nearly 16 year old cat who has recently taken to roaming  the house and yowling at night. I saw you on the local news and had never considered that she  might be suffering from something akin to SAD. After some research, I thought it made perfect  sense. This is her second winter in the Portland area, coming from sunny California.  We have used the Sol Box now for a few days. I’m up early and turn it on for both of my cats.  They both seem to like the light and are more than willing to lay in front of it for 30-60 minutes  after they eat.  I have had two peaceful nights of sleep. She did get a little fussy last night when I first went to  bed but she settled down into her bed after only about 2 minutes. I’m very optimistic that the Sol  Box is doing the trick.

Do you think your cats could benefit from light therapy?

This giveaway is closed.

Enter to Win a Sol Box For Your Cat

To enter this giveaway, please  leave a comment and let me know why you want to win the Sol Box. For an additional chance to win, share this giveaway on Facebook, Twitter, Google+ or Pinterest, and leave a separate comment for each social network, letting me know that you shared. No need to post the link to your share. This giveaway is open to readers in the United States only, and ends Thursday, May 9, 2013. Winners will be chosen by random drawing*.

Pawsitive Lighting is offering a special 30% discount on all Sol Box purchases for Conscious Cat readers only. Simply enter code CONSCIOUSCAT at checkout.