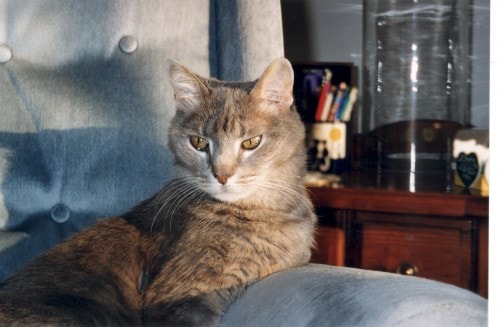 I’d venture that most of us can remember the cat that started it all: the one cat that launched us on the path of loving cats. For some, it may be a childhood cat, for others, it may be a more recent, an unexpected feline who decided that it was time for the human to share her life with a cat, or two or three.

I didn’t get my first cat until I was in my twenties. I was not allowed to have pets as a child; the apartment building I grew up in would not permit them, but I would temporarily adopt cats for the duration of almost every family vacation. I grew up in Germany, and in those days, a typical vacation meant that you went to one place and stayed there for two or three weeks at a time. We stayed at small bed-and-breakfasts or rented a vacation condo, and somehow, at every place we stayed, we would either find a resident cat or two, or there would be a number of stray cats hanging around the property. The times I spent with these cats make up some of my happiest childhood memories.

Feebee was a grey tabby cat who was born in the Shenandoah Valley of Virginia to a cat named Blue, who belonged to a childhood friend of my former husband. Walt and I were living in Germany at the time, but we would be moving back to the Washington, DC area shortly, so Walt’s friend saved one of the kittens in Blue’s litter for us.

Meeting Feebee was love at first sight for me. We took him home as soon as we had moved into our new house in Northern Virginia, and for the next fifteen and a half years, Feebee was the love of my life. He saw me through my divorce as well as the death of my mother. He was my primary emotional support during those dark days. If it wasn’t for him, you might not be reading this book.

He was also instrumental in guiding me toward a new career. I was increasingly unhappy with my corporate job but had no clear sense of what I was meant to be doing with my life. Then Feebee took matters into his own paws, so to speak, and developed bladder stones. The time we then spent at veterinary hospitals for diagnosis, treatment, and surgery led me to change careers. I started volunteering and then working part time at veterinary hospitals, which eventually led to a full-time position managing an animal hospital. For the first time in my life, I was excited about going to work each day.

Thank you, Feebee, for being the one who started it all. I’ll always be grateful that you found your way into my life.

Who was the cat that started your love affair with cats?

19 Comments on Do You Remember Your First Cat?