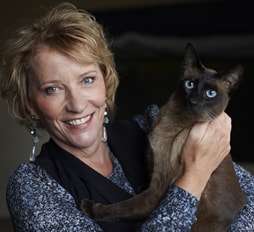 Helen Brown is the author of Cleo: The Cat Who Mended a Family and the brand new Cats and Daughters: They Don’t Always Come When Called.  She was born and brought up in New Zealand, where she first worked as a journalist, TV presenter and scriptwriter. Now living in Melbourne, Australia with her family, Helen continues to write columns for the New Zealand media, and she’s been voted Columnist of the Year several times.  Cleo rose to the top of the bestseller lists in its first week in the UK, New Zealand, and Australia and has been translated into more than 16 languages.

I previously interviewed Helen after the release of Cleo, and I’m delighted to welcome her back to The Conscious Cat today.

How was writing Cats and Daughters different for you from writing your first book? 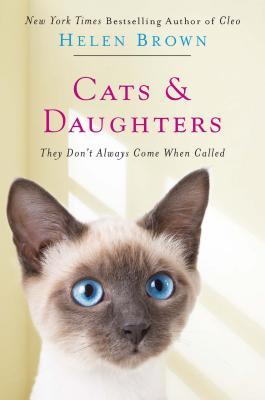 Writing Cats and Daughters after the success of Cleo was nerve wracking. But I received countless emails from readers asking for a sequel and I knew there was more story to tell – specially with Jonah having such a strong personality.

Cleo was an international bestseller. How has that success changed your life?

I’m still in a mild state of shock that Cleo became a New York Times Best Seller and is translated into more than 16 languages. Becoming an international author has expanded my world. I love traveling and meeting readers and publishers in different countries. It’s taught me that people are pretty much the same everywhere. We’d all do anything for our kids and pets.

Living with a cat with behavioral challenges can be exhausting for cat parents, and Jonah came into your life at an already stressful time, yet you seemed to cope with both humor and grace. What advice do you have for cat guardians whose furry children are acting up?

Don’t beat yourself up. Seek professional advice. Since writing Cats and Daughters I’ve encountered heaps of people who have medicated pets. It’s nothing to be ashamed of.

You’ve been spending some time in New York, and you’re even fostering a kitten while you’re there. Can you tell us a little about how that came about?

I thought my publisher was crazy when she suggested I foster a cat while in the US. My Australian friends told me I’d be nuts to do it. Chances of finding an animal friendly apartment in NYC were slim anyway. Then my daughter Lydia trawled the net and found a pet friendly building, which happens to be just around the corner from the shelter. It felt like a case of “meant to be”. 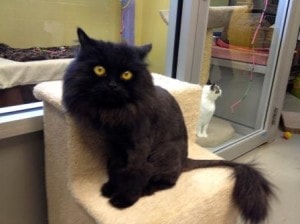 I’m totally in love with Bono. He’s been in a shelter six months and may never find a home. Though he’s only four years old he has kidney failure. He is so sweet and friendly, people are attracted to him. But when they find out he may have only three years to live they turn away.

He’s made my stay here so special, I’d take him back to Australia if animal importation rules weren’t so tough. Besides, Jonah would make his life a misery. I’ve been writing about Bono for Huffington Post and Facebook. He has fans around the world now. I don’t want to leave New York until I’ve found him a home.

Who or what inspires you?

The people and animals of so-called ordinary life are my heroes. It takes so much courage to live well.

What are you currently reading?

Apart from Time Out New York and The New York Times? The poems of Mary Oliver. I love the way they connect nature and spirituality.

Are you working on another book?

I’m venturing into fiction with two new books. I hope they’ll have buckets of laughter and soul in them.

For more information about Helen and her books, please visit her website. 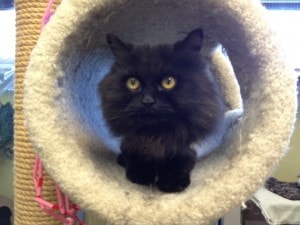 If you are interested in adopting Bono, please constact Bidawee. Bideawee has been the leading pet welfare organization serving metropolitan New York and Long Island for more than 100 years.

Photo of Helen Brown by James Braund, photos of Bono by Helen Brown. All photos used with permission.

4 Comments on Interview with Helen Brown, Author of Cats and Daughters