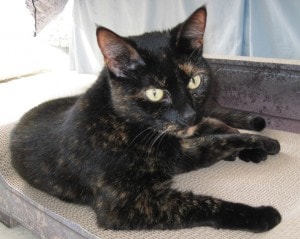 Then there’s The Platinum Rule: “Treat others the way they want to be treated.”

Think about it for a moment. The Golden Rule is all about you: you simply assume that everyone should want what you want, and you’re going to treat them accordingly. It’s all about control. This was brought home to me the other day, when Allegra gave me one of her rare lap times. Allegra is a supersweet, affectionate cat, but she does not like to sit in my lap, nor does she like to be held. As a result, the times when she does make one of her rare lap appearances are extra special. As I found myself thinking once again “I wish she’d do this more often,” I realized that there was a big lesson there for me to learn. I can’t control how she gives back loving – you can’t force a cat to sit in your lap when she doesn’t want to be there – but I can appreciate how she expresses her love, on her own terms.

According to The Golden Rule, me loving on her should produce reciprocation – she should love on me, in the way I’d like to be loved on: by sitting in my lap endlessly. But that’s just not her personality, and I don’t love her any less for it.

The Platinum Rule allows me to honor her for the unique cat she is, and to give her loving in ways that she’s comfortable with: by stroking her when she rubs up against me or rolls over on the floor for me, by quietly sitting next to her, by having her tucked against my back when we’re sleeping at night.

This, of course, extends to people as well: The Platinum Rule accommodates the feelings of others. The focus shifts from “this is what I would want, so I’m going to give exactly that to the other person” to “let me first understand what they want and then I’ll give it to them.”

Hmm. Was he really talking about cats?

Cats are uniquely suited to teach us to follow The Platinum Rule.