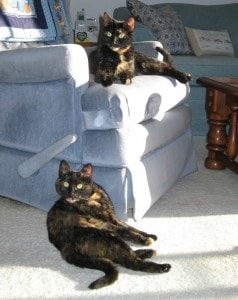 Vetstreet tracks the trendiest and most popular pet names each year. In 2011, the name Ruby made it on the list, and of course, my little Ruby had quite a lot to say about that!

This year, Vetstreet looked at the names of more than 643,000 kittens born in 2012 to determine the trendiest cat names of the year. Apparently, there’s a difference between popular and trendy. 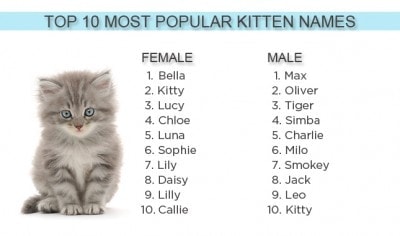 The most popular kitten name list doesn’t contain a lot of surprises. It seems like old favorites such as Kitty, Tiger and Callie continue to be popular choices for many cat guardians. Where it gets interesting is with the newer trends: not surprisingly, many of the trendy names come from popular culture, especially movies. Katniss, the name of The Hunger Games’ heroine, hasn’t quite made the the top 10 but is on the rise. Also gaining popularity are Loki and Thor, likely because of the enormous popularity of The Avengers movie.

Ruby was actually named after a Hunger Games character before I adopted her. She was listed as Cinnamon on the SPCA website, but her foster parents told me that she was really named after Cinna, the stylist for the games. They almost named her Katniss. Full disclosure: despite this connection, I gave up on trying to read The Hunger Games after the first 100 or so pages, and I haven’t seen the movie – it’s just too violent for my taste.

The list of trendiest names includes names such as Zeus, Jackson (maybe after Jackson Galaxy?), Thor, and Stella. Visit Vetstreet for the full list of the year’s trendiest cat names.

For the full story of how Ruby got her name, read Ruby’s Reflections: what’s in a name. Allegra came with her name, and it suited her joyful personality purr-fectly. “Allegro” is a musical term, meaning “cheerful” and “lively.” She is not named after the allergy medication!