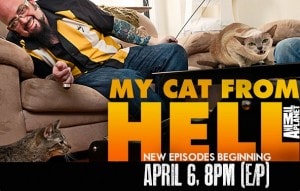 If you’ve been going into My Cat From Hell withdrawal, your wait is almost over: Jackson Galaxy returns to Animal Planet with Season 4 of his hit show on April 6. The new season features 17 new episodes.

According to Animal Planet, the new season will test Jackson’s knowledge and maybe even teach this seasoned cat man some new tricks. This season’s line up of cat cases includes felines that can’t control their bladders, kitty turf wars, cat mood swings and a ferocious feline that does severe damage to its 95-year-old owner. Jackson also tackles the human elements at the root of these problems (and as we’ve seen in past seasons, it’s often the humans who need Jackson’s help far more than the cats), including feuding roommates, enabling owners, overbearing cat parents and confused disciplinarians.

I was also happy to see that, in addition to the new crop of cases, AnimalPlanet.com takes Jackson back to revisit former clients in Hell Cats Revisited: How do you Like Meow? Also debuting on April 6 as a complement to the TV series, this 16-episode, original short-form web series follows up with some of the most memorable felines from past seasons. Have the cat’s guardians employed Jackson’s techniques successfully to achieve harmony with their cats?

Mark your calendars, or set your DVR’s. Check your local listings for showtimes.