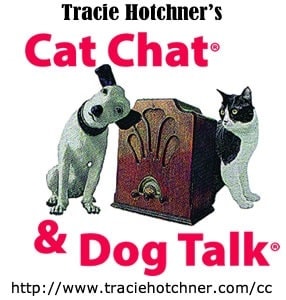 Join me tonight from 8pm to 10pm Eastern on Cat Chat® & Dog Talk® with Tracie Hotchner and Shawn Messonier, DVM. During the first hour, Tracie and Dr. Messonier will answer your cat (and dog) questions. During the second hour, we’ll be talking about Purrs of Wisdom.

I’m very excited to be on this show. I had previously been on Tracie Hotchner’s show when it was still on the Martha Stewart channel of SiriusXM satellite radio, and I had a great time discussing Buckley’s Story with her. Tracie Hotchner is one of the best known pet wellness advocates in the United States. She is the author of The Cat Bible: Everything Your Cat Expects You to Know.

I’m also very excited to “meet” Dr. Messonier, who I’ve been admiring since my days working in the veterinary profession. Dr. Messonier is a nationally recognized authority on holistic pet care and integrative medicine.  He is the author of the award winning Natural Health Bible for Dogs & Cats, and his column The Holistic Vet is featured in newspapers throughout the United States.  He owns Paws and Claws Animal Hospital in Plano, Texas.

Click here to listen to the show live online.

I look forward to spending time with you on the internet airwaves tonight!

4 Comments on I’ll Be on CAT CHAT Radio Tonight