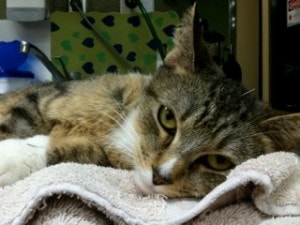 When a  good Samaritan found a wounded stray cat in her neighborhood and noticed that the cat appeared to be unable to use her hindlegs, she brought it to a local veterinary hospital for humane euthanasia. The cat appeared to be suffering, and it seemed like the right thing to do. After examining the young (barely a year old) cat, a veterinarian at the hospital decided that this little girl deserved a second chance at a good life, and accepted the cat as what is called a “surrender” in order to avoid euthanasia.

X-rays revealed a shattered pelvis, torn diaphragm and collapsed lung lobe. All of these injuries can be life threatening, and were most likely caused when the cat was hit by a car. The cat was named Pretzel, because the lack of funtion in her hindlegs caused an abnormal gait and a twisted appearance. Pretzel underwent surgery to repair her diaphragm and was spayed. Her pelvis slowly healed, and she began regaining some function in her hindlegs.

Dr. Patrick Mahaney, a holistic veterinarian in Los Angeles, donated acupuncture treatments to help Pretzel regain sensation in her previously paralyzed legs. Mahaney considers Pretzel one of his greatest acupuncture successes. “After providing her with a series of needle and electrostimulation acupuncture treatments, I had her walking much more normally and even climbing to her second level crate in her temporary, in-hospital home.”

You can watch the reamarkable transformation in pretzel in these two videos:

According to Dr. Mahaney, this super sweet cat was eventually placed in a great home.

I worked with a veterinary acupuncturist for several years, and while I have not seen a recovery quite as miraculous as Petzel’s, I’ve seen some pretty remarkable successes with this modality. Have you used acupuncture for your cats? Share your stories!

Photo of Pretzel by Dr. Mahaney, used with permission.