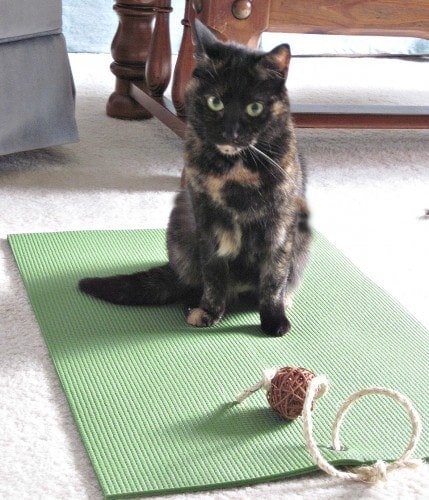 I’ve always felt that cats and yoga make for a purr-fect combination, which his why I was delighted when I discovered Feline Yogi, a blog with the tagline “Celebrating the Most Enlightened Species – the Cat!” Feline Yogi is brought to you by Pippy, a feline yogini who has her paws full to keep her humans in line: “They spend an obscene amount of time in front of their computers,” says Pippy, “when they could be taking care of my needs.” Pippy’s human Paige says she’s doing her best to be at the beck and call of any feline needs that may arise, while still making time for her own yoga practice – something she’s been focused on for over 20 years.

Paige is also the creator of the Feline Yogi Mat. Over the past two decades of practicing yoga, Paige found that inevitably, when she brought out her yoga mat, all her cats would immediately plop themselves smack in the middle of the mat, leaving no room for her. She decided that the cats needed their own mat.

We received a Feline Yogi mat for review. I couldn’t wait to see what Allegra and Ruby would do. While I’ve practiced yoga in the past, I don’t currently have an active practice (I’ve become a Pilates devotee over the past few years), so they’re not used to having a yoga mat out and about. Clearly, I’ve been depriving them of a fun experience!

The mat looks and feels just like a regular, extra thick yoga mat. It is made with phthalate free dyes and inks, and it offers something that can’t be found on a human yoga mat – a special kitty yoga prop. Thick sisal rope with a catnip stuffed twine ball is attached to each yoga mat, and it has been a big hit with both of my girls. 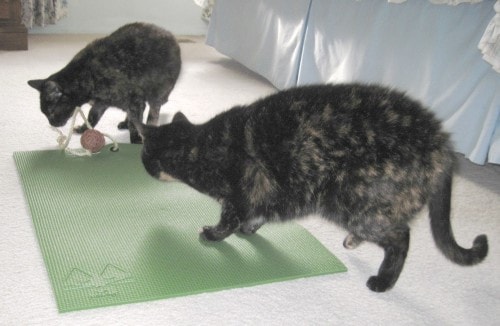 As soon as I unrolled the mat, the girls came running to check it out.  Not surprisingly, Ruby gravitated toward the attached toy, whereas Allegra was fascinated with the rubber smell of the mat. She loves to chew on anything plastic, and gave the mat a good chew test right away. 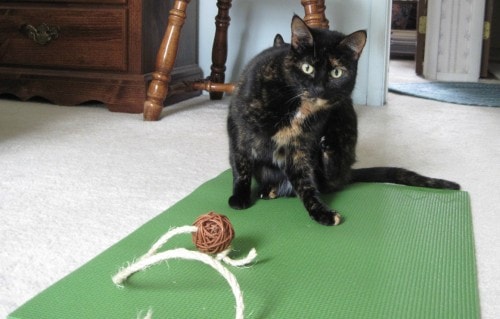 Allegra demonstrated an innovative feline yoga position, with Ruby looking on. You’ll have to look very closely to see where Ruby is watching from! 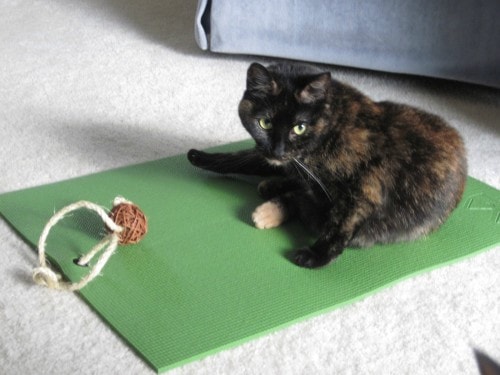 Not to be outdone, Ruby also demonstrated proper use of the mat with her own Ruby asana.

The mat has become a permanent fixture in our home, and you never know, it may just inspire me to start practicing yoga again. Paige’s recent guest post certainly reminded me of the many benefits of yoga, especially when practiced with cats.

For more information about the Feline Yogi Mat, please visit FelineYogi.com. The Feline Yogi Mat comes in many different colors and is available from Amazon with free shipping for Prime members.

FTC Disclosure: I received the Feline Yogi Mat at no charge. Receiving the complimentary mat did not influence my review. All reviews on The Conscious Cat will always reflect my honest opinion, or, as the case may be, Allegra and Ruby’s honest opinion.