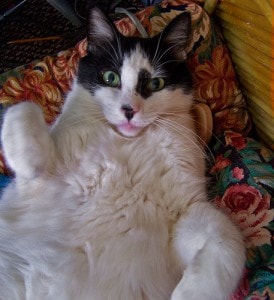 An estimated 30 percent to 40 percent of all cats will be affected by cancer. Mammary (breast) cancer is the third most common cancer in cats, after lymphoma and skin cancer. More than 90% of the victims are female cats older than 10 years of age. Early detection of this type of cancer is critical and greatly improves chances of survival for affected cats.

Mammary tumors often appear as small, hard lumps the size of a pebble or pea. They may be moveable, or may be firmly attached to the skin or underlying muscle. The most common locations for these tumors are the first front sets of mammary glands, but they can occur anywhere near the cat’s nipples. In its initial stage, the tumor may be hard to feel, it’s not painful, and there won’t be any obvious clinical signs. It can be months before a growth is noticed.

Diagnosis is obtained by surgically removing the growth, along with some surrounding tissue, and submitting it to a pathologist for a biopsy. This will determine whether the tumor is benign or malignant. Chest x-rays and chest and abdominal ultrasound will help determine whether the mammary mass has spread to lymph nodes and/or other organs.

The first step is surgery to remove as much of the tumor as possible, as well as the entire chain of mammary glands on the side that the growth was found. If both sides were involved, both sides will need to be removed. Aggressive surgery is a cat’s best chance for longer term survival; survival times may be 1 year in about 50% of cats and 2 years in 32% of cats. If lymph nodes are affected at the time of surgery, survival time may be reduced. If the tumor is in an advanced stage at the time of surgery, a less aggressive surgery of a more palliative nature may be more appropriate to remove the infection of an external tumor and make the cat more comfortable.

If the cancer has spread to the lymph nodes or other organs, chemotherapy may be an option. Depending on how advanced the cancer is, chemotherapy results may range from a survival time of several months to complete remission (no detectable tumors, at least temporarily).

While initial treatment may be successful in cats when the tumor is caught at an early stage, the longterm prognosis is generally guarded. Up to 65% of tumors will recur within less than a year, and unfortunately, most cats survive less than a year following diagnosis. Cats whose tumors are caught early generally live 2 to 3 years following diagnosis.

While mammary cancer in cats is not completely preventable, there is evidence that early spaying (before a cat comes into her first heat) can reduce the risk. Regular veterinary exams are important. Additionally, cat guardians can play an important role in early detection of this disease by regularly palpating a cat’s chest and belly, especially around the mammary area.

72 Comments on Mammary Cancer in Cats