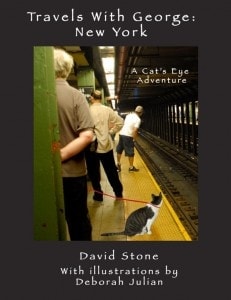 I love cats, and I love New York City, so I had no doubt that I would love Travels with George: New York, the second in David Stone and Deborah Julian’s Cat’s Eye Adventure series. I just wasn’t prepared for how much I loved it.

In the first book in the series, Travels with George: Paris, George, a much-loved indoor cat living in a New York City high-rise, stows away in his humans’ luggage as they get ready for a trip to France. Imagine his surprise, not to mention his humans’, when he finds himself in a hotel room in Paris, along with his younger cat friend Billy, who somehow found his way inside the luggage, too.

George and Billy know they’ll never get away with that kind of an adventure again, but they came to like being “out” for something other than a vet visit. One day, they hear their humans talk about something called an “economy.” George is not sure what that means, but apparently, it’s not good, because it means the humans won’t be able to travel as much. George thinks that’s actually a pretty good thing for cats, because he doesn’t particularly like it when they’re gone. Waiting for food, and not having anyone to sleep with other than his friend Billy is not George’s idea of a good time. But then, his humans decide on something they call a “staycation:” they’ll pretend to be tourists in their own city. And they’ll take the cats along. George can smell another adventure!

Either safely tucked away in their carriers, or on harnesses and leashes, George and Billy get to explore New York City landmarks ranging from Central Park to Rockefeller Center to Times Square. They get to ride in cabs and on the subway. The two cats are now seasoned travelers, and they take the sounds and sights of the city in stride. They enjoy a boat ride in Central Park, a stroll across the Brooklyn Bridge, and a tour through MOMA, the Metropolitan Museum of Modern Art. They get to visit Ellis Island and the Statue of Liberty. They even get to go to the top of the Empire State Building!

David Stone’s charming rendition of George’s experiences (I’m guessing George dictated to him…), and Debora Julian’s signature illustrations in beautiful, full color print, captivate the readers’ imagination on this unqiue tour of New York City. There is such a sweetness about this book: the love of both authors for their cats, and their city, comes through on every page. Set aside a couple of hours on a quiet afternoon, curl up with your favorite cat, and treat yourself to this wonderful book.

David Stone is the author of two other works of fiction, The Garden of What Was and Was Not, a counterculture classic, its sequel, Traveling Without A Passport, and of the nonfiction title: A Million Different Things: Meditations of The Worlds Happiest Man. For more information about David and his numerous other writing projects, please visit his website.

Deborah Julian is a photographer, innovative artist and art gallery director whose favorite subjects are cats, New York City, and travel.   Please visit Deborah’s Etsy Shop for a selection of cards and prints from her original artwork. 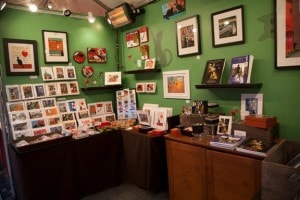 I’ll be the guest of digital artist Deborah Julian
at the Columbus Circle Holiday Market in New York City
December 19 from 1 to 8pm.