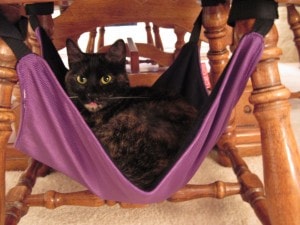 Last Sunday night, we told you we were ready for the approaching storm. We had stocked up on emergency supplies, including canned food for Allegra and Ruby in case their raw food went bad in the event of a power outage, and chocolate for me in case – well, because you need chocolate when life gets stressful. We had Storm Soother and Stress Stopper on hand. We were as ready as you can ever be for something like this.

By the time we woke up Monday morning, it was raining heavily. The forecast was for the rain and wind to increase steadily throughout the day, with the worst to come in the afternoon and into the night. I decided to venture out for my weekly Pilates session in the morning, followed by lunch with a friend. I needed the distraction from worrying, not to mention the exercise. The roads were already deserted, and many businesses were either already shut down, or closing early. By the time I got home a couple of hours later, the wind had started to pick up in earnest.

I expected to find Allegra downstairs, in or near her safe space in the downstairs bathroom, but to my surprise, she spent much of Monday upstairs in my office, or sleeping in the bedroom. Ruby spent quite a bit of time sitting by the window. She had fun watching things blow by. She got especially excited when a big trash can made its way down our street.

The howling wind and punishing rain were unnerving, to say the least, but the power stayed on. I distracted myself from worrying with work, and frequent visits to Facebook. The support of my Facebook friends from around the world was very  much appreciated. I’ve always maintained that Facebook is so much more than just a social network, it’s a true community. Never does this become more apparent than during events like Sandy. I never once turned the television on on Monday. I did not want to be exposed to the nonstop coverage. I was scared enough without seeing images of flooding and devastation as Sandy made her way toward the coast. What I saw during my forays to Facebook was sufficiently terrifying.

I posted the photo above of Ruby in her “hurricane shelter” on Facebook, and smiled when it went viral. I like to think it brought a smile to some other very stressed people as well.

As the rain and wind continued to increase throughout the day, Allegra got a little less brave. By nightfall, she spent most of the time downstairs. I dosed her frequently with Storm Soother and Stress Stopper. I took liberal hits of both myself. She came upstairs to eat her dinner, then headed back to her safe place.

By the time it got dark outside, it felt like the trees in my backyard were even closer to the house than they really are. I couldn’t decide whether not being able to see what was going on outside was worse or better. Finally, I decided I was just going to try to go to bed. Much to my surprise, Allegra joined Ruby and I, and we all slept huddled against each other. The girls slept their usual deep sleeps. Mine was a bit more fitful.

When I woke up to the morning news of the devastation Sandy had wrought in New York and New Jersey, I realized how fortunate we had been. Even though there were some power outages and downed trees across my area, the storm hadn’t been as bad as forecasters had feared. Some of this may be due to the fact that the derecho that hit our area in June already took down a lot of weak and older trees, leaving less potential for damage.

I can honestly say that I have never felt more grateful than I did Tuesday morning, when I woke up in a warm house, with my two girls cuddled up against me, and all the trees in my yard still standing.

This was definitely the worst storm I’ve been through. I lived through Hurricane Gloria in 1985 and Isabel in 2003, but I don’t remember being as terrified during those storms as I was on Monday. I had to draw on every lesson I ever learned, mostly from my cats, about living in the moment, the uselessness of worrying, and the power of surrender. And I was reminded again of how much I have to be grateful for.

My heart goes out to everyone in the affected areas.

Were you affected by Hurricane Sandy? How did you and your loved ones cope?