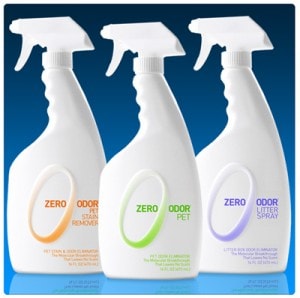 I was first introduced to Zero Odor about a year ago at a feline behavior seminar hosted by Dr. Nicholas H. Dodman, BVMS, DACVB. Zero Odor was a sponsor of the seminar and each attendee received a bottle of the Zero Odor Litter Spray. Litter odor is not a problem at my house – I scoop practically the minute Allegra or Ruby leave their box – but I decided to put the product to the test for other “odor challenges,” such as trash cans and cooking odors, and it worked remarkably well for those.

I connected with Zero Odor at the 2012 BlogPaws conference earlier this year, where they sponsored the fabulous Catification Lounge, and received a sample of their Odor Eliminator, which works amazingly well.

All Zero Odor products are based on a patented formula that eliminates pet odors on a molecular level. It actually turns odor molecules into non-odor molecules, so pet odors depart forever. It’s non-toxic and biodegradable, so you can feel good using it around your cats. And for me, the best part is that the products don’t cover odor or mask it with heavy fragrances. They simply eliminate the offending odor without leaving a scent of their own.

We’re delighted to be able to offer a Zero Odor Pet Multi Kit to one lucky winner!

For more information about the products, please visit ZeroOdorPet.com.