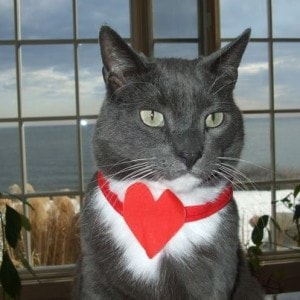 When Ingrid asked if I’d like to write a blog about cats in my life as models for the cats in my books, I couldn’t wait to get started!

As I was about to turn thirteen, awkward and shy and brimming with early teenage yearning, I wanted only two things for my birthday. One was a date with Micky Dolenz of the Monkees. Which I could never have handled even had it been possible.

My second wish was for a kitten. Unfortunately, my birthday is in January and we lived in frozen Michigan, so kittens were scarce. But my pet-loving mother searched the animal shelters within a fifty mile radius and tracked down an orange tiger kitten. He had already been returned by one family, and so came with a “no refund” receipt. 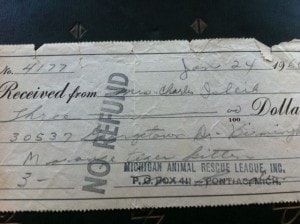 Tigger was a huge hit, blending right in with the rest of our menagerie. And I adored him as much as I thought I would, prompting my mother’s infamous sex-education talk: 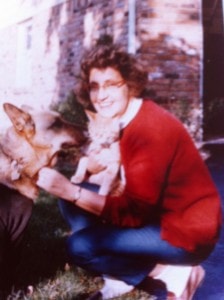 “One day you’ll feel about a man the way you do about the cat.”

(My husband is still waiting…)

Once out on my own, I was never catless, living with Gabriel, Spearman’s Rho, Suitcase the Terrible, and Jack the Cat in various combinations. Jack was a true champion of a cat, affectionate, talkative, and handsome. And he bridged my two marriages, traveling from one life to another with great dignity. Over the past ten years, we’ve also been owned by Chuck and Tipper, neither of whom were people persons. Ahem, that’s the nicest way I can describe it… 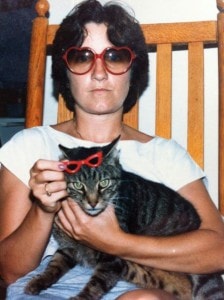 But the neighbor next door had an amazing cat named Yoda (pictured at the top), who often wandered over to visit. Once my reclusive duet had passed on to the great sandbox in the sky, Yoda came in for frequent visits and I volunteered for babysitting duty as often as possible. When he developed an aversion to my neighbor’s pugs, she reluctantly transferred his title to me.

I’ve written ten mysteries in three different series and like me, all three of my main characters have owned cats. Unfortunately, Cassie Burdette, an aspiring professional golfer, had to leave her childhood pet, Cashbox, home when she started to travel. Rebecca Butterman, the psychologist in my advice column mysteries, acquired a cat (fashioned after Yoda) from the neighbor’s mother after her daughter was murdered. Here’s how it happened in Deadly Advice:

“I have a favor,” said the woman. She bit her lip. “I hate to ask…”
“Anything I can do for you,” I answered firmly. I hung up our sodden raincoats and blotted the cat dry with a towel, then settled both visitors into oversized beige recliners.
“The cat, Spencer,” the woman said. “Would you keep him for me? For Madeline? Just for a couple of days, I mean, until I find him a home. I live in a senior facility and they don’t allow animals. Besides, I might be allergic.” She extracted a starched handkerchief from the pocket of her tween pants and honked emphatically.
I was reminded of a social psychology study where salesmen were taught to ask a small favor first. Once their potential customer had agreed to the little request, the following large one was accepted easily. Half an hour later, Isabel went next door to retrieve Spencer’s dishes, a sack of low-ash, low-carb cat food, and the litter box.

And sure enough, Rebecca ends up with a full-time cat and is drawn into the murder investigation.

Hayley Snow, the heroine in my new Key West food critic mystery series, lives on a houseboat with her cat Evinrude, and their housemate. Hayley is feeling insecure because she’s recently been dumped by the boyfriend she followed to Key West. I borrowed Evinrude almost completely from Jack the Cat. Here’s his earliest introduction in An Appetite for Murder:

I’d left my roommate’s houseboat late because I couldn’t decide what to wear. I winnowed it down to two outfits and asked Evinrude, my gray tiger cat, to choose. Black jeans and a form-fitting white T-shirt with my shin-high, butt-kicking, red cowgirl boots? Or the cute flowered sundress with a cabled hoodie? From his perch on the desk, the cat twitched his tail and said nothing. But I bet Kristen would never go for “cute.” I shimmied into the jeans, scrunched a teaspoon of hair product into my still-damp auburn curls, and set out at a fast clip. 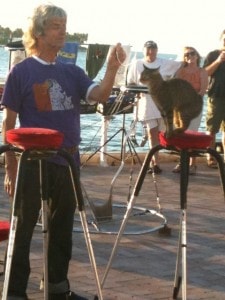 There are more cats in the story, and in each book, there’s a a cameo of Dominque the Cat Man and his Flying Housecats, who can be seen every night at the Sunset Celebration on Mallory Square. So I invite you to visit Key West through the food critic mysteries. While cats don’t solve the mysteries, they occasionally provide a clue, and they always contribute to the entertainment! 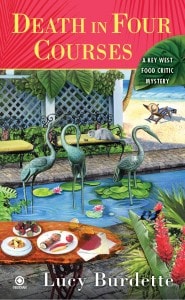 Death in Four Courses is out today! You can read more about the book and the author at her website or follow her on Facebook or Twitter. Lucy Burdette has also written eight mysteries as Roberta Isleib, including Deadly Advice.

All photos by Lucy Burdette/Roberta Isleib, used with permission.

A note from Ingrid: I received a copy of Death in Four Courses from the author. I thoroughly enjoyed the Key West setting, the immensely likeable heroine and the colorful secondary characters in this food-centric mystery. And of course, I loved Evinrude, the cat.

11 Comments on A life in cats, real and fictional